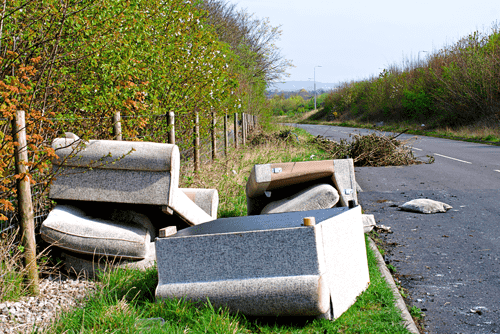 Who Is Liable In A Road Debris Accident?

It happens more frequently than most people realize. A chair, a mattress, or some other piece of furniture comes tumbling off the back of a poorly loaded pickup truck. A worn-out tire on a big rig starts to unravel, spewing thick fragments of tread across the road. A dump truck headed for the landfill hits a pothole and sends rocks, bricks, or other construction materials flying toward your windshield.

Road debris can turn a quick jaunt on the highway into a deadly obstacle course, leaving motorists only seconds to respond. Although it’s not as common a problem as drunk or distracted driving, it can lead to serious crashes. According to a study by the AAA Foundation for Traffic Safety, road debris was a factor in a total of more than 200,000 police-reported crashes across the U.S. over a four-year period, resulting in approximately 39,000 injuries and 500 deaths. Compared to other types of crashes, those involving road debris are four times more likely to occur on interstate highways; most are the result of items falling from a vehicle due to improper maintenance or unsecured loads.

Because such incidents often occur at high speed in heavy traffic, road-debris hazards can present extremely challenging situations for even the most experienced drivers. They can also pose tough liability questions for drivers seeking compensation for injuries suffered in an accident caused by road debris. But there are steps you can take to reduce your chances of being seriously injured by road debris and to try to establish who’s responsible for the damage done.

No one can anticipate every road hazard that might develop ahead on a busy highway. But one basic strategy for staying safe is to give likely debris generators a wide berth. Keep your distance from cars or trucks hauling what appears to be poorly secured open-air loads, such as pickups stacked with furniture, appliances, or landscaping equipment or SUVs and station wagons with boxes or mattresses tied on top; if possible, get in another lane entirely. Don’t follow too closely behind trucks hauling gravel and other potential missiles.

If debris does suddenly appear ahead, don’t panic. Slamming on your brakes could result in getting rear-ended; if you have time, reduce your speed, put on your flashers and seek a safe path around the debris, either by moving to the shoulder or another lane. But making such a maneuver without sufficient clearance could make the situation worse; according to the AAA study, nearly 37 percent of all deaths in road debris crashes resulted from the driver swerving to avoid hitting the object. If changing lanes isn’t an option, sometimes the least risky scenario could be driving into or over the debris, at a greatly reduced speed.

If you see a vehicle losing cargo (or even parts of the vehicle) and not stopping to address the problem, you should report the incident to the highway patrol. Don’t try to stop and personally remove objects in the roadway if there is other traffic; let the authorities know it’s there so that a trained road crew can deal with it. And you can do your part to help avoid similar situations by keeping to a regular maintenance and inspection schedule for your vehicle, which can identify worn-out tires, corroded mufflers, and other possible debris problems before they happen.

Figuring out who is responsible for the damages resulting from a road-debris crash can be a difficult process. In the best-case scenario, the driver of the vehicle that dropped the debris is aware of the problem, pulls over, removes the debris, and exchanges insurance information with anyone impacted by the incident.

But in many cases the negligent driver doesn’t stop — and may not even be aware of the debris. If you saw the object fall off the vehicle and have the presence of mind to note a license plate number while maneuvering around the hazard, then you may have super powers —and the means to establish liability. But it’s more likely that the case will require additional investigation, by the police or trained investigators working for your personal injury lawyer, who will attempt to locate the responsible party. It’s also possible that the negligent driver will remain unidentified and that you may have to seek compensation through your own uninsured motorist coverage.

In some cases, there may also be liability issues involving the agencies or private contractors responsible for road maintenance. But establishing liability in such instances can be a formidable task; many government agencies enjoy a high degree of immunity from claims over bad road conditions. An experienced attorney can advise you on how best to proceed.

If you or a loved one has suffered injuries or financial loss as a result of a road debris crash, you may be entitled to compensation. Over the past 30 years, Franklin D. Azar & Associates has represented victims in a wide array of complicated and serious personal injury and wrongful death cases. Our proven track record and expertise have allowed us to grow into the largest personal-injury law firm in Colorado, with offices in Denver, Aurora, Thornton, Greenwood Village, Colorado Springs, and Pueblo. If you’ve been injured in a bus, car, truck, or motorcycle accident, call the attorneys at FDAzar day or night at 720-372-2824 or contact us here for a free consultation and no-obligation evaluation of your case.