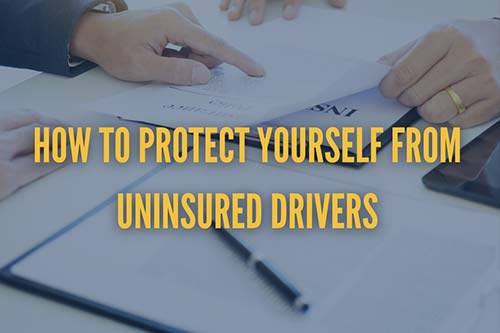 How To Protect Yourself From Uninsured Drivers

Getting hurt in a serious car accident because of another driver’s carelessness is bad enough. But when the at-fault driver is uninsured, or doesn’t have enough insurance coverage to pay for your medical treatment and other damages from the crash, you can find yourself in a financial bind as well. That irresponsible driver has just heaped financial injury on top of physical injury.

It’s a problem few people see coming until it happens to them: Uninsured drivers without the means to pay for the consequences of their own actions. Injured people forced to drain their own resources to pay their bills and recover from a catastrophic event. Fortunately, there are steps you can take to protect yourself, your loved ones and your assets from such an unfair situation — but the time to act is now, not after the crash.

Nationally, it’s estimated that 13 percent of all drivers, about one out of every eight, is on the road without insurance. That adds up to 32 million uninsured drivers in the United States, a staggering figure. And your chances of being in a collision with one of them are even greater in Colorado, which has a substantially higher rate of uninsured drivers than the national average.

One insurance industry trade organization estimates that around 16 percent of Colorado drivers are ignoring the law that requires them to carry insurance. But that figure is based on 2012 data, and several industry sources suggest that recent developments, including the influx of new residents across the state and the economic hardships related to the pandemic, have significantly boosted the total. The current number of uninsured drivers in our state, they say, is closer to twenty percent — one out of every five motorists on the road in Colorado.

That’s a disturbing number. But uninsured drivers are only part of the problem. Of the 80 percent of the driving public who do have insurance, nearly half of them are carrying the bare minimum of coverage required by law. In Colorado, the minimum liability coverage amounts to $25,000 per person for bodily injury, with a maximum of $50,000 per incident, and another $15,000 in coverage for property damage. That may be enough for minor accidents, but it’s clearly inadequate for more serious situations, in which medical costs (or even just vehicle damage for a higher-end model) could easily exceed the policy limits.

Because Colorado’s minimum requirements are so low, the risk that the costs of an accident are going to exceed the available coverage is higher than in many other states. If you do happen to be injured in an accident that wasn’t your fault, the likelihood that the other driver carries no insurance at all or is underinsured is better than 50-50.

How can you protect yourself from medical expenses of tens of thousands of dollars, even hundreds of thousands, in that situation? The answer is to make a modest investment in your own auto insurance plan, by increasing the Uninsured and Underinsured Motorist Coverage available to you.

Uninsured Motorist Coverage: A Must

Uninsured/underinsured motorist coverage covers your losses from being hit by a driver who does not have insurance, or if the at-fault driver is underinsured. Depending on the specifics of the coverage, it can help pay for medical bills, lost wages, and other losses caused by the accident.

In Colorado, insurance companies are required to offer uninsured motorist bodily injury coverage (UMBI) as part of any standard policy; if you don’t want it, you must formally waive that coverage in writing. But you not only shouldn’t waive it, you should consider increasing the coverage well beyond the minimum. This is one point that insurance agents and attorneys who represent injured people agree on; UMBI coverage is a must.

Many people resist the idea of spending more on their auto insurance to protect themselves from people who aren’t carrying the proper insurance themselves. It doesn’t seem fair. But we routinely pay for homeowner’s insurance, life insurance, and other policies that protect our assets and our families from all sorts of catastrophic events — many of which are less likely to occur than a car accident with an uninsured or underinsured driver. By increasing your car insurance costs by just a few dollars a month, you can avoid the devastating effects of a huge gap in coverage down the line.

How Much Coverage Do I Need?

How does this help? Suppose you are injured in an accident, and the at-fault driver has only the state minimum in liability coverage. Your medical bills run close to $100,000; the at-fault driver’s insurance will pay for the first $25,000, your own uninsured motorist coverage will pay the rest.

But if your recovery costs from the accident run much higher than that, you still don’t have enough in UMBI to cover the shortfall. You should consider increasing your coverage to the maximum amount offered by your carrier — in most cases that’s $250,000 per person and $500,000 per accident. It will cost you a few hundred dollars more in premiums per year than the bare-bones minimum coverage, but it has the potential to save you tens of thousands in costs from a bad wreck with an uninsured driver.

Here’s a chart showing average six-month costs for the increased coverage for one vehicle and one driver. Your individual premiums could be slightly higher or lower, depending on your age, your driving record, the type of vehicle and other factors.

As you can see, the additional costs of maximizing your protection from uninsured motorists are actually quite modest compared to the coverage increase; for about $80 more per month, you can get ten times the coverage you would have with the state minimum requirement.

People who have substantial assets to protect should consider upping their coverage even more. Some companies offer umbrella policies that provide $1,000,000 in extended liability coverage and UMBI. (To qualify, you would have to already be carrying the maximum $250,000/$500,000 liability policy.) Umbrella policies are not uncommon among property owners concerned that a lawsuit could jeopardize their home or retirement savings, but few people realize that they can add UMBI coverage for not much more. Rates vary, but currently a 50-year-old driver seeking coverage for one car and home could obtain a million-dollar umbrella policy for around $330 a year, including $150 or so for uninsured/underinsured motorist coverage. That’s less than $30 a month!

No one likes to spend more than they need to on insurance. But when it comes to protecting yourself from uninsured drivers, the additional costs of increasing your coverage are minimal compared to the danger of not having enough protection to see you — and your passengers and your loved ones— through the high cost of recovery from a serious accident.

For more than thirty years the attorneys at Franklin D. Azar & Associates have helped thousands of injured people obtain complete and timely compensation for their losses. Our proven track record and expertise have allowed us to grow into the largest personal-injury law firm in Colorado, with offices in Denver, Aurora, Thornton, Greenwood Village, Colorado Springs, and Pueblo. If you’ve been injured in a bus, car, truck, or motorcycle accident, you may be entitled to compensation.  Please call the car accident attorneys at FDAzar day or night at 800-716-9032 or contact us here for a free consultation and no-obligation evaluation of your case.