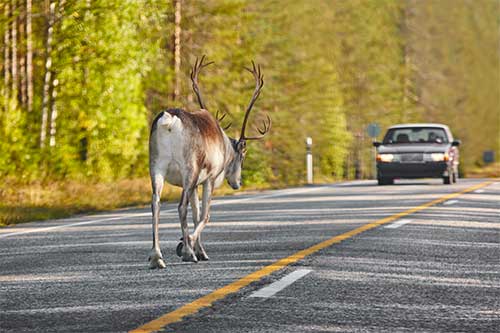 No one wants to hit a deer or other animal while they’re driving. Most people value living creatures and don’t want to be the reason for killing any. Hitting a deer or other large mammal also can cause accidents as well as car damages. Handling a roadkill collision can be daunting if you’re unclear about which steps to take.

Read below for tips to avoid hitting wildlife on the road. You’ll also learn what to do if you cause or encounter roadkill and how your auto insurance coverage might cover any damages in an animal-related accident.

Jump to:
Part 1: How To Avoid Deer and Other Animals on the Road
Part 2: What to Do if You Hit a Deer or Encounter Roadkill
Part 3: If I Hit a Deer, Does Insurance Cover It?

Number of Animals Hit by US Vehicles Each Year

The statistics about roadkill in the United States tend to be either approximated, incomplete or fragmented.  The National Highway Traffic Safety Administration estimates that at least 1 million large animals per year are hit by vehicles. This includes deer, elk, moose and caribou. That means one in every 160+ drivers will hit a deer or other large animal on the road this year. Data from the Colorado Department of Transportation indicates that 4,000 deer were hit in 2017 in Colorado.

Wildlife and transportation researcher Patricia Cramer estimates this data is one-fifth to one-tenth the actual numbers of fauna killed on the road. On average, crash data typically is only reported if there is at least $1,500 in damage. Truck drivers and uninsured motorists typically do not report animal collisions.

Including other wildlife such as squirrels, opossum, skunks, turtles, frogs, armadillo and rabbits, the number could be closer to “millions per week” according to the Humane Society of the United States. A study conducted in the 1960s estimates the number of animals killed on the roads could be in excess of 1 million per day, or 365 million vertebrates per year.

Animals crossing the road aren’t always wild either. It is estimated that 1.2 million dogs, and 5.4 million cats, are killed on the road each year.

Animals That Are Most Often Hit by Cars

According to a Purdue University study that involved researching 10,000 dead animals over the course of 17 months on an 11-mile stretch of roads, the animals you are most likely to encounter on the road include frogs, mammals ranging from deer to rabbits, birds, reptiles, and amphibians.

Does Insurance Cover the Repair Costs Caused by Roadkills?

The Western Transportation Institute at Montana State University estimates that collisions with animals costs $8 billion each year. Virtually all collisions with deer, elk and moose cause damage to the car or truck, according to the Federal Highway Administration.

The average cost for repairs, towing and cleaning up the carcass in a deer collision is $8,000, while an elk averages $18,000 and a moose can be upwards of $30,000, according to the Montana institute.

Given these expenses, it’s important to check to make sure you’ll be covered by insurance in the event that you have a collision with an animal, whether it’s a moose or a bird.

Collision insurance does not cover animal-related accidents. The only insurance coverage that protects your vehicle against physical damage to your car, when the collision doesn’t involve a stationary object or another vehicle, is comprehensive coverage. This is sometimes also referred to as “other-than coverage.”

With comprehensive coverage, your insurance company will pay for damages to your vehicle if they cost more than your deductible. Typically deductibles are about $500.

Will My Rates Go Up if I File an Animal-Collision Claim?

Rest assured that claims for repairs due to hitting a deer or other animal do not count against you or drive up your rates – unless you have the bad luck of hitting several animals or filing several other comprehensive claims within a short period.

Depending on the type of animal you hit, some have unique coverage protocols.

For dogs and farm animals, owners are responsible for accidents caused by the animals. If you can’t easily locate the owner, you can file a claim under your comprehensive coverage policy and the insurance carrier will go after the animal’s owner.

Roadkill and animal-vehicle collisions aren’t pleasant topics to dwell on. However, the subject is at least less anxiety-inducing when you’re preparing to get behind the wheel if you know how best to avoid animals on the road, what to do if you hit a deer or other animal, and how your insurance policy might help cover costs for damages.