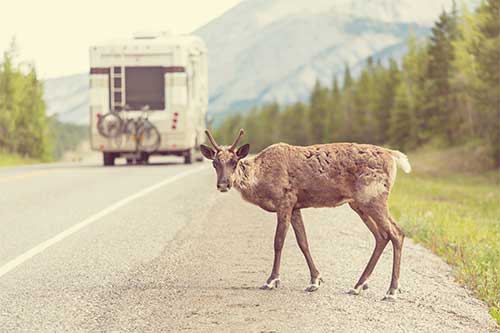 Part 1, How To Avoid Hitting a Deer and Other Animals on the Road

No one wants to hit a deer or other animal while they’re driving. Most people value living creatures and don’t want to be the reason for killing any. Hitting a deer or other large mammal also can cause accidents as well as car damages. Handling a roadkill collision can be daunting if you’re unclear about which steps to take.

Read below for tips to avoid hitting wildlife on the road. You’ll also learn what to do if you cause or encounter roadkill and how your auto insurance coverage might cover any damages in an animal-related accident.

Jump to:
Part 1: How To Avoid Deer and Other Animals on the Road
Part 2: What to Do if You Hit a Deer or Encounter Roadkill
Part 3: If I Hit a Deer, Does Insurance Cover It?

In the Denver metro area, the highway where most animal-related accidents occur is on US 285 between Conifer and the CO 470 interchange. I-70 between Genesee Park and Denver and I-25 from Castle Rock to Castle Pines are also high animal collision areas, according to the Colorado Parks and Wildlife Department.

The top 10 areas for annual reported animal crashes in Colorado are:

Routes Where Wildlife-Vehicle Collisions Are Highest

The Western Transportation Institute at Montana State University says 90 percent of crashes with animals occur on rural two-lane roads. Experts believe this is because animals are less likely to approach highways where there is heavy traffic, bright lights and noise. On the other hand, collisions on side roads are less likely because vehicles are moving at a slower pace and may be able to avoid hitting animals that enter the road.

Peak Seasons, Times of the Month and Hours for Deer Collisions

Breeding data shows that fall is the time of year you are most apt to hit a large mammal such as deer, elk, moose and caribou. According to James Stickles, a researcher at the University of Georgia, deer-vehicle collisions increase during “rutting season” when deer become more active looking for mates.

CDOT data analyzing wildlife-vehicle collisions over a 11-year period confirms the UGA researcher’s assertion. The most dangerous month for hitting an animal in Colorado according to collision data is July, followed by June, November and August.

Interestingly, research conducted by Clarkson University Biology Chair Tom Langen points to moon phases as a contributing factor in determining when deer are most likely to be on the road. Research indicates that you are more likely to hit a deer during a full moon. Langen believes deer might be more comfortable moving from cover during the full moon.

Stickles’ colleague, Bob Warren, a professor at UGA’s Warnell School of Forestry, says dawn or dusk are the times of day when hitting a deer is most likely, since deer are most active during those times.

Tips to Avoid Hitting a Deer on the Road

In addition to the above statistical information, here are tips that motorists can do to avoid hitting a deer or other animal:

Of course, you also want to wear a seatbelt at all times, avoid distractions, stay alert and wear protective gear if you’re on a motorcycle.

It’s important to also be aware that deer and other animals often travel in groups. “In many instances, it’s the second deer that crosses the road that gets hit,” said Warren.