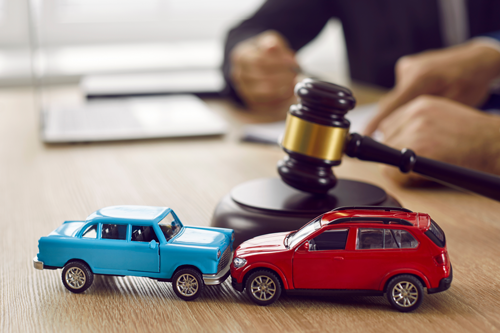 How Is Liability Determined After A Car Accident?

A successful car accident claim usually comes down to having the law, the evidence, and professional expertise on your side. The outcome of most accident cases hinges on two key issues: being able to present proof of damages and to establish the liability of the other party for causing those damages.

Typically, being able to prove damages is a relatively straightforward matter. Someone who’s been in a bad wreck is going to have hospital and doctor bills, photos of the damage done to their vehicle, and other evidence of the losses they suffered as a result of the incident. But the process of determining who is at fault for the accident, a necessary step in holding that party responsible for the damages stemming from the collision, is not always simple.

In some cases, the parties may be in agreement about who’s at fault. Someone ran through a red light, failed to yield to oncoming traffic while making a left turn, or pulled into traffic without looking. But the question of fault can be more complicated than it appears at first; a number of factors can be involved in determining a driver’s degree of liability. Here are some useful points to consider as you deal with the aftermath of an accident and the fact-finding process that attorneys and insurance companies go through.

THE IMPORTANCE OF A POLICE REPORT

Don’t make the mistake of not filing an accident report after a crash. It’s not only the prudent thing to do if you want to help the insurance company process your claim, but the law requires it. In Colorado, accidents must be reported if they cause personal injury or any property damage.

Calling the police brings a professional into the situation, who will investigate the accident and attempt to determine the person at fault.

In many cases, the officer’s opinion of who was at fault will be accepted by the parties involved and their insurance companies. But in other instances, the officer might be unable to reach a conclusion about fault, or the officer’s decision will be challenged by one or more of the parties or their insurers. In highly disputed situations, you may benefit from the assistance of an experienced car accident lawyer, who can also bring in accident reconstruction experts to help resolve the question of fault.

Even if the police report is clear and unequivocal about the cause of the accident, keep in mind that in most states any traffic citation issued in an auto accident is not admissible evidence at trial on the civil claim. The investigating officer may still be allowed to express an opinion about who was at fault, but there’s no guarantee that the insurance companies will accept the police findings.

In other words, the police report is useful —but it may not be the last word.

Police and insurance companies try to gather relevant physical evidence to help determine how the accident happened. This could involve photos of the damage and paint scrapes, measuring skid marks, checking the operation of traffic lights and video cameras in the area, and so on.

Car accident witness statements are also important. In addition to contacting police, any contact information you can gather from witnesses could prove to be helpful down the line.

Some witness testimony may be unreliable, and the parties involved may not want to say much of anything. If the other driver makes statements admitting fault, you should take note — but avoid making such statements yourself and avoid any confrontations.

But suppose the person who was rear-ended stopped abruptly, without good reason or warning? Suppose the driver turning left had a green arrow, and the oncoming traffic ran the light?

A finding of fault depends on individual circumstances. And even in “simple” cases, the ability to receive compensation for damages can vary from state to state.

Where you live can determine how insurance companies determine fault. Some states have no-fault laws, which mean insurance companies are responsible for covering the claims of their own customers, regardless of who caused the accident. In “pure contributory negligence” states, you can’t recover damages from an at-fault driver if your own actions contributed to the accident in any way.

Insurance companies often assert that the injured person bears some of the fault for an auto accident, thereby greatly reducing or eliminating the damages the company is expected to pay. An experienced auto accident lawyer often can uncover evidence and argue effectively on your behalf if comparative negligence is asserted as a defense against your claim.

For more than thirty years the attorneys at Franklin D. Azar & Associates have helped thousands of injured people obtain complete and timely compensation for their losses. Our proven track record and expertise have allowed us to grow into the largest personal-injury law firm in Colorado, with offices in Denver, Aurora, Fort Collins, Thornton, Grand Junction, Greenwood Village, Colorado Springs, and Pueblo. If you’ve been injured in a bus, car, truck, or motorcycle accident, you may be entitled to compensation.  Please call the car accident attorneys at FDAzar day or night at 800-716-9032, or contact us here for a free consultation and no-obligation evaluation of your case.