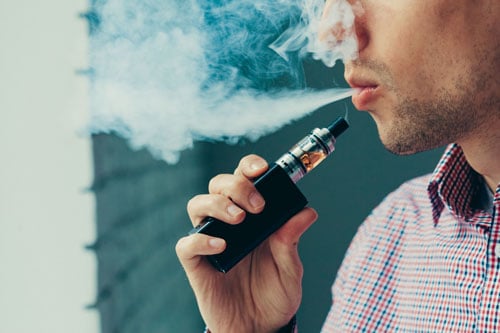 The Food and Drug Administration recently announced that it has denied marketing applications for millions of vaping products because the makers haven’t provided sufficient evidence that the products have benefits that outweigh their public health risks.

Vaping — using an e-cigarette, which heats a liquid product into a vapor that can be inhaled — has been promoted as a cleaner, “safer” alternative to tobacco use, which accounts for 480,000 deaths a year in the United States. But critics say that vaping products contain chemicals that have been linked to a number of lung injuries, in addition to containing high levels of nicotine. Health officials have also been critical of the industry for offering exotic flavors that attract teen users; in 2018 the U.S. Surgeon General declared that teen vaping had become an “epidemic.”

Last year the FDA required the vaping industry to submit marketing applications for a flood of new products, many of which were already being sold in stores. After months of review, the agency issued “marketing denial orders” for more than 946,000 flavored vaping devices, known as electronic nicotine delivery systems (ENDS). According to the agency, those applications “lacked sufficient evidence that they have a benefit to adult smokers sufficient to overcome the public health threat posed by the well-documented, alarming levels of youth use of such products.”

Flavored products are preferred by 80% of underage e-cigarette users. Among the products issued marketing denial orders were those boasting flavors such as Apple Crumble, Dr. Cola, and Cinnamon Toast Cereal.

The FDA also issued “refusal to file” actions on another company’s applications for approximately 4.5 million different products because the applications were missing required contents. A “refusal to file” allows the company to resubmit its application but prohibits sale of the affected products in the interim. The agency has yet to make a decision on products from several major e-cigarette companies, including Juul.

Prior to the application process, the vaping industry had operated without many of the marketing restrictions imposed on traditional tobacco products. But the new stance suggests that more enforcement actions will be coming, and that the industry’s claims of providing adult smokers with a useful cessation device are being greeted with increasing skepticism.

If you or a loved one has suffered injuries as the result of a defective product, medical device or a dangerous prescription drug, the product liability lawyers at Franklin D. Azar & Associates may be able to help. We have been helping injured people receive the compensation they deserve for more than thirty years. We are currently investigating reports of serious side effects involving the diabetes drug Actos, the chemotherapy drug Tasigna, Zantac and other heartburn drugs, the gout drug Uloric, and several other medications. Call us today or contact us here for a free, no-obligation consultation.