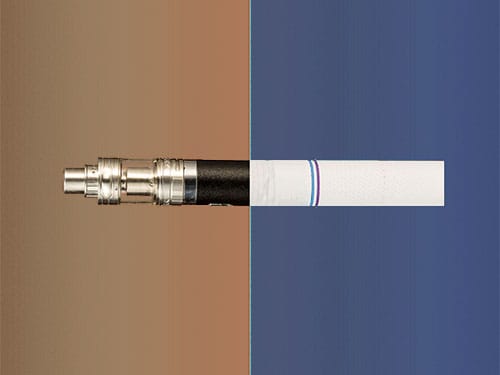 First, the good news. The number of adult Americans who smoke cigarettes has declined significantly in recent years, from 21 percent in 2005 to less than 16 percent in 2016. That represents a big drop in tobacco-related mortality, although smoking remains the leading cause of preventable disease and death in the country, accounting for 480,000 deaths a year.

At least part of the reduction can be attributed to the development of better smoking cessation aids and programs, such as nicotine gum and patches.

It’s also been suggested that the growing popularity of e-cigarettes and vaping could be a factor; the makers of e-cigarettes promote their products as a cleaner, safer alternative to “tobacco combustion.”

But there is tremendous controversy about the vaping business, a $10-billion-a-year industry that’s expected to triple in size in the next three years. Health researchers dispute many of the claims about the supposed benefits of e-cigarettes, and the Food and Drug Administration is in the process of cracking down on sales of such products, particularly to teen users, citing a range of concerns about addiction and health risks. The government’s campaign is a full-frontal challenge to some of the myths of this emerging, booming market.

An e-cigarette is basically a delivery device that heats a liquid product into an aerosol or vapor that can be inhaled. Vaping means using an e-cigarette or other vaping devices. It is called “vaping” because the clouds of vapor are produced when someone uses an e-cigarette.

Because there’s no cigarette butt, noxious ash and smoke, or strong odor, users tend to assume that the product is a “cleaner” and more benign choice than a traditional cigarette.

But what’s in the liquid? Nicotine, typically, as well as a host of other chemicals. Some of those chemicals have toxic properties, and the effect of “vaping” them hasn’t been studied nearly as extensively as the data compiled on cigarettes over the last half century.

What is known about them indicates that they can be highly addictive — even more so than old-fashioned tobacco. A single JUUL “pod” of liquid contains more than three times as much nicotine as an entire pack of cigarettes. (JUUL is currently the dominant player in the vaping biz; some users refer to vaping as “JUULing.”) Earlier this year the FDA began to require JUUL and other companies to include a warning label stating that the products contain nicotine and are addictive.

THE APPEAL OF TEEN VAPING

There are hundreds of brands and thousands of flavors of e-cigarettes on the market now. Many of the flavors — nectar, fruity blends, cucumber, and so on — seem designed to attract young users.

Surveys indicate that the number of high schoolers who regularly use e-cigarettes has jumped by 75 percent in the past year, from 1.73 million to nearly 3 million.

The popularity of the flavored products has prompted the FDA to propose possible restrictions on what flavors could be sold at convenience stores and gas stations. But teens have no trouble buying them online.

FDA Commissioner Scott Gottlieb had lamented that e-cigarette use among teens has reached “an epidemic proportion” and has to be addressed. JUUL recently announced that it was discontinuing sales of many of its exotic flavors and shutting down social media sites in anticipation of the FDA action and to discourage sales to underage users.

One criticism of the efforts to crack down on e-cigarettes is that the campaign could make the products more difficult to obtain for those who are using them as an alternative to cigarettes. But there’s great skepticism among health professionals about whether inhaling a highly addictive product, loaded with chemicals that can be harmful to the lungs and other organs, is really the lesser of evils, or of any use whatsoever in smoking cessation. Some experts point to data that indicates users may end up switching back and forth between cigarettes and e-cigarettes while remaining addicted to both.

The Centers for Disease Control offers this advice for parents: “Let your child know that you want them to stay away from all tobacco products, including e-cigarettes, because they are not safe for them. Seek help and get involved.”

THE CONSUMER PROTECTION ATTORNEYS AT FDAZAR

If you or a loved one has suffered injuries as the result of a defective or dangerous product, the consumer protection lawyers at Franklin D. Azar & Associates may be able to help. We have been helping injured people receive the compensation they deserve for more than thirty years. Call us today or contact us here for a free consultation.