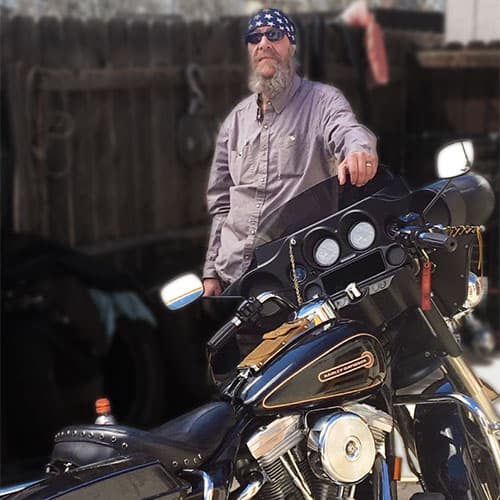 Motorcycle Accident Settlement – $1.275 Million: The Story of One FDAzar Client

Meet Russell Dunn. You may have seen Russell in one of our television commercials, talking about the catastrophic motorcycle crash that changed his life.

At FDAzar we represent many hard-working people like Russell who, through no fault of their own, were seriously injured. We feature actual clients in our commercials because we believe their stories are important. Of course, these stories are presented with some common-sense disclaimers: Every case is different, and previous results are no guarantee of future performance. But we think these case studies help to convey how hard our firm fights for every one of its clients.

In Russell’s case, the story behind his $1.275 million settlement carries another message as well. His ordeal, painful as it was, demonstrates steps you can take with your insurance coverage to help protect yourself well before disaster strikes.

Before the crash, Russell worked as a semi-tractor driver for a building insulation product distribution company. He was in good health and loved his work on the road as well as the home he shared with his wife in Aurora. He also had a passion for Harley-Davidson motorcycles, working on them and riding them in his spare time.

One spring afternoon in 2018, Russell was riding his motorcycle in the downtown area of Greeley, Colorado. Suddenly and without warning, the driver of a Mazda in the lane to Russell’s left attempted to make a right turn, cutting across the motorcycle’s lane. Russell did not have time to react and his motorcycle crashed into the passenger side of the Mazda, ejecting Russell through the air and onto the southwest corner of the intersection.

As is often the case in a motorcycle vs car accident, the motorcyclist suffered the brunt of the impact. Russell’s injuries included numerous serious lacerations and fractured bones, from the top of his scalp to his spine to his toes. His recovery would require major hip surgery and an intensive rehabilitation program. Unfortunately, Russell suffers permanent physical impairment as result of his injuries.

DEALING WITH THE INSURANCE COMPANIES

“Not enough insurance to cover accident”

There was no question of who was at fault for causing the crash; the investigating police officer issued the Mazda driver a citation for turning from the wrong lane. But the responsible driver’s auto insurance policy provided only $25,000 of liability coverage. Although the other driver’s insurance company agreed to pay the policy limit, that amount couldn’t begin to address Russell’s medical bills and other losses.

Fortunately, Russell carried $250,000 of underinsured/uninsured motorist coverage as part of his own auto insurance policy — a vital safeguard that comes into play when an at-fault driver fails to carry insurance or has coverage that is inadequate to address the damages involved. (We’ve written before about the importance of protecting yourself from the underinsured, especially when as many as one out of every eight drivers is on the road without any auto insurance at all.)

In addition, Russell had prudently taken out an umbrella policy to protect his family’s assets from various possible liability issues; that policy included an additional $1,000,000 of underinsured motorist coverage.

Of course, the fact that a policy is capped at a million dollars doesn’t mean the insurance company is going to automatically pay that amount.

Russell’s team at FDAzar made a detailed investigation of his injuries, damages and losses resulting from the crash — not just his medical costs and lost income but his ongoing condition, which would prevent him from working as a truck driver again.

Without having to go to court, the insurance company agreed to pay the policy limits. The end result: $25,000 from the responsible driver’s liability insurance, $250,000 in underinsured motorist coverage from Russell’s own auto policy, and $1,000,000 from the umbrella policy — a total settlement of $1,275,000, providing Russell with the means to pay his bills and continue working on his Harleys.

For more than thirty years the motorcycle accident lawyers at Franklin D. Azar & Associates have helped thousands of injured people obtain complete and timely compensation for their losses. Our proven track record and expertise have allowed us to grow into the largest personal-injury law firm in Colorado, with offices in Denver, Colorado Springs, Pueblo, and Trinidad. If you’ve been injured in a car, truck, or motorcycle accident, you may be entitled to compensation. Please call the car accident attorneys at FDAzar day or night at 720-372-2824 or contact us here for a free consultation and no-obligation evaluation of your case.