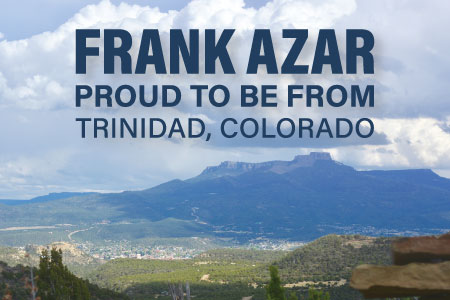 In a recent interview with a local television station, Frank Azar expressed pride in his lifelong connections to Trinidad, Colorado — and explained how his home town’s rich history has helped to shape his career as one of the region’s best-known personal injury attorneys.

“People in Trinidad stand up for the underdog,” Azar told FOX 21 News. “I’ve stood up for the rights of the little guy all my life.”

Born in southern Colorado, Azar grew up in Trinidad, where his father was the district attorney for the Third Judicial District. After receiving his law degree from the University of Denver, Azar returned to Trinidad to work as an assistant district attorney before launching his own practice, Franklin D. Azar & Associates, which has become the largest personal injury law firm in the state.

But Azar attributes much of his success to what his formative years taught him about championing the underdog. Trinidad’s fiercely independent streak dates back more than a century, to a time when striking coal miners defied their corporate bosses and demanded change. As a youth, Azar heard stories about the coal mine wars and the Ludlow Massacre from older relatives. “That was something that was ingrained in me as a small child,” he told FOX 21. “You’ve got to stand up for your rights.”

As an attorney, Azar has focused on representing individuals pitted against large corporations and insurance companies. One of his biggest cases started with a single Walmart pharmacist in Trinidad who believed he’d been treated unfairly by the company; the case became the first of a series of class-action lawsuits brought by Azar’s firm against Walmart in 26 states and led to substantial changes in the company’s treatment of its employees.

Azar continues to sponsor scholarships, food drives and other community programs in Trinidad and visits as frequently as he can, catching up with old friends. “That’s where my heart is,” he says. 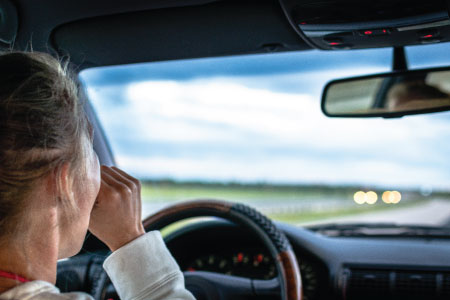 Government data has long confirmed that teen drivers are at the highest risk of any age group of getting into a serious car crash. Their lack of experience behind the wheel, tendency to engage in risky behavior and impulsivity, among other factors, have made such crashes the leading cause of accidental death among drivers between the ages of 15 and 24.

Teens are also more likely to be operating on less sleep than other drivers, notes author Lisa L. Lewis in her new book, The Sleep-Deprived Teen: Why Our Teens Are So Tired, and How Parents and Schools Can Help Them Thrive. In an excerpt of the book published in Slate, Lewis examines the drowsy teen driving phenomenon in, well, eye-opening detail. Here are some key takeaways on the topic: 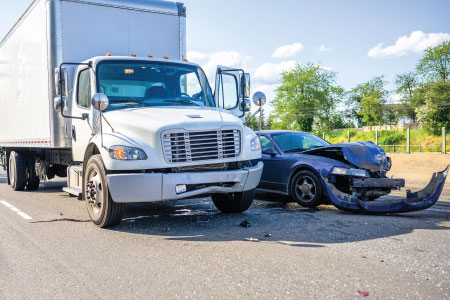 According to date tracked by the National Safety Council, 4,965 people died in large-truck crashes across America in 2020. That’s an increase in truck-related fatalities by almost a third over the past decade and represents more than ten percent of all traffic deaths. Here are some important questions and answers about what causes big-rig crashes and how to avoid them.

Why are big-truck crashes more dangerous than other accidents?

Big rigs are 20-30 times heavier than passenger cars, with much greater ground clearance, which can result in smaller cars getting the brunt of the impact and being dragged under the truck. In two-vehicle crashes involving a large truck and a passenger car, close to seventy percent of those seriously injured or killed were occupants of the car.

What’s the reason the number of fatal crashes has increased so much over the past decade?

Several factors may have played a part in the increase in fatal crashes, including more trucks on the road, driving millions of more miles each year. Today’s big rigs have more built-in safety features than ever before, but aging fleets, inadequate training and other industry woes have also contributed to the problem.

What are the most common causes of truck accidents?

Studies indicate that at least one “driver-related factor” shows up in roughly a third of all large-truck fatal crashes. Speeding is the most commonly cited risky behavior. Distracted driving is pretty common, too; more than half of all fatal truck crashes occur in rural areas, where drivers are likely to become distracted or inattentive after hours of traveling largely empty roads. Impairment, from drug or alcohol use or simple fatigue, may be greatly underestimated but still shows up as a factor in one out of every seven truck crashes.

But driver error isn’t the only culprit. Weather and road conditions, defective equipment or mechanical failure can play a part; tire defects alone are said to be responsible for a third of all truck-related crashes. In other instances, unbalanced or excessive loads could be involved, too. And, of course, some crashes are caused by the behavior of other drivers.

Can the trucking company be held responsible for a truck crash?

If the company was negligent in its hiring or training procedures, or it failed to address important maintenance or repair issues for its vehicles, or encouraged drivers to ignore federally established hours-of-service limits, it may share the blame for a truck crash. An experienced truck accident attorney can provide more guidance on this complex question.

What steps should be taken to avoid a truck crash?

Trucks of all kinds should be approached with care in any traffic situation. Too often, drivers of passenger cars don’t make allowances for the fundamental differences in the way trucks operate, from braking capability (a loaded tractor-trailer can take up to 40 percent longer than a car to stop) to general maneuverability. Give truckers a wide berth, and don’t lurk in the “no-see zone,” the areas beside or behind a truck where the driver has little or no visibility. Don’t change lanes abruptly in front of a truck, and don’t underestimate the speed (or overestimate the braking ability) of an oncoming rig when turning left at an intersection. Share the road, and everybody has a better chance of getting home safely.

The Car Accident Lawyers At FDAZAR

If you or a loved one has been injured in an accident involving a car, truck, motorcycle, or other vehicle, Franklin D. Azar & Associates can help. Our track record over thirty years of representing seriously injured people has helped us to grow into the largest personal-injury law firm in Colorado, with offices in Denver, Aurora, Greenwood Village, Fort Collins, Thornton, Colorado Springs, Grand Junction, and Pueblo. We have experienced accident lawyers ready to review your case with you, and we have the dedication to represent your interests and get you the compensation you deserve. Call us at 800-716-9032 or contact us here for a free, no-obligation consultation and evaluation of your case.