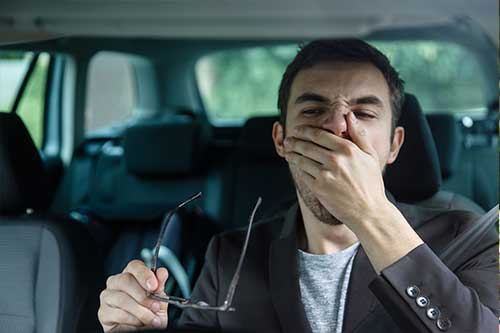 HOW DANGEROUS IS DROWSY DRIVING?

We’ve all been there. The road stretches monotonously ahead, and drowsiness is settling into your bones like a heavy fog. Your eyelids sag. Your head nods. If you don’t do something about it, you’re going to fall asleep at the wheel — and be in for a rude awakening, if you wake up at all.

Drowsy driving is both more common and more dangerous than most people realize.  In fact, it may be one of the leading killers on the road, second only to driving drunk. Here’s what you need to know to help stay alert behind the wheel and make it home safely.

The National Highway Traffic Safety Administration blames drowsy drivers for approximately 800 fatal accidents a year. The Zebra, a leading insurance comparison site, states that the actual figure is closer to 1,500 deaths per year in their 2021 Drowsy Driving Statistics article. But several other sources, including the Centers for Disease Control and the Governors Highway Safety Association, maintain that the actual figure is closer to 5000 or 6000 deaths a year. The discrepancy stems from the fact that it’s not always possible to confirm that fatigue was a factor; also, since alcohol consumption frequently plays a part in dozing off while driving, many of those fatalities are categorized as drunk driving rather than fatigue-related incidents.

Many other factors can also lead to drowsy driving. Commercial drivers putting in long hours and night-shift workers are particularly susceptible to bouts of fatigue while driving. So are those suffering from sleep disorders, such as sleep apnea or narcolepsy, or the millions of Americans who simply don’t get enough sleep.  And, of course, numerous medications generate drowsiness and shouldn’t be taken before hitting the road.

Whatever the cause, there are a disturbing number of sleep-deprived drivers on the road, especially at night. In one survey of nearly 150,000 adults, four percent of respondents admitted to having fallen asleep while driving in the past 30 days.

That suggests there are a lot of sleepy motorists on the road at any given time. The ones taking the survey clearly survived the experience, but others may not; even the NHTSA’s conservative estimates peg drowsy driving as responsible for more than 90,000 police-reported crashes a year, resulting in tens of thousands of injuries.

HOW TO AVOID DROWSY DRIVING

For more than thirty years the attorneys at Franklin D. Azar & Associates have helped thousands of injured people obtain complete and timely compensation for their losses. Our proven track record and expertise have allowed us to grow into the largest personal-injury law firm in Colorado, with offices in Denver, Greenwood Village, Colorado Springs, and Pueblo. If you’ve been injured in a bus, car, truck, or motorcycle accident, you may be entitled to compensation.  Please call the car accident attorneys at FDAzar day or night at 720-372-2824 or contact us here for a free consultation and no-obligation evaluation of your case.