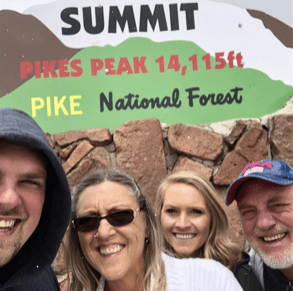 Derek and Delanie, a brother and sister in their twenties, had a great plan for celebrating their parents’ 30th wedding anniversary: a family summer vacation in Colorado. The siblings set out with parents Diane and Dale in a rental car, exploring the mountains, the breweries, and other attractions. The trip was a great success — right up until its final moments, when a horrific accident changed everything.

The crash put Diane in a hospital bed, fighting for her life, while other family members struggled to deal with the long-term emotional and economic trauma of the event. Fortunately, they didn’t have to make that difficult journey alone. They had a powerful ally on their side, with the know-how, resources and dedication to help them fight the legal and financial battles they were facing: the law firm of Franklin D. Azar & Associates.

On the morning of June 4, 2019, the visitors stopped for gas on their way to Denver International Airport to catch a flight back to Florida. As they left the gas station and headed for the rental car return area, the driver of a heavy-duty pickup truck attempted a left turn in front of them, failing to yield. The collision hurled Delanie and Diane, seated in the back of the rental car, in opposite directions.

“I looked to my left, and I didn’t see her,” Delanie says of her mother. “She had fallen behind me. She wasn’t responding to me. I saw the biggest gash in her forehead. She said she couldn’t see anything. We knew it was bad.”

Diane was rushed to a hospital, and the other driver was cited for careless driving. But it soon became clear that Diane’s injuries were so serious, including numerous fractures and severe head trauma, that doctors would have to remove part of her skull to relieve the brain swelling and place her in a medically induced coma for weeks. In order to be near her, Derek and Delanie would have to put their own lives on hold and find temporary lodging in the Denver area. While the family had health insurance, the bills for medical care and other expenses piled up rapidly.

“We realized we should get a lawyer,” Delanie says. “But when you’re in a city you’ve never been, how do you get good recommendations?”

At a friend’s suggestion, the family contacted the Azar firm. They were soon speaking with an attorney, who offered his personal cell number. The siblings were impressed with the attorney’s responsiveness and all-hours availability to discuss the case and their general welfare. “He was a friend in a city where we knew nobody,” Derek says. “He made sure we were taking care of ourselves.”

Once the extent of Diane’s injuries had been assessed, the Azar firm sent the other driver’s insurance company a demand letter, seeking to provide the family with financial relief and avoid a protracted court battle. The company agreed to a $5.3 million settlement, comprising the maximum limits on the defendant’s auto policy and coverage from an umbrella policy as well.

After months of being bedridden, Diane is on the road to recovery. She has lost sight in one eye and her sense of smell; she requires the aid of a certified nursing assistant (CNA) to help deal with the effects of her head injury. But in many ways, her rehabilitation has gone much better than her doctors anticipated a year ago. “To see where she went from day one to where she is now, I am speechless,” says an attorney involved in the case. “What she’s accomplished is remarkable.”

For more than thirty-five years the attorneys at Franklin D. Azar & Associates have helped thousands of injured people obtain complete and timely compensation for their losses. Our proven track record and expertise have allowed us to grow into the largest personal-injury law firm in Colorado, with offices in Denver, Aurora, Greenwood Village, Colorado Springs, and Pueblo.