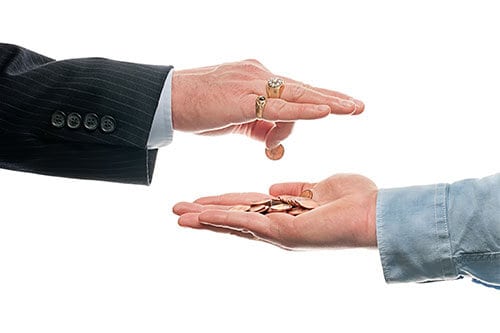 Economists talk about the current recovery as having its “fragile” side, and with good reason. Unemployment is down, but most Americans aren’t seeing any real gains in their paychecks. And stagnant wages can be a particularly worrisome problem if you’re barely making ends meet.

According to data gathered by the Bureau of Labor Statistics, the median hourly wage nationwide is now $18.12 — which means that half of all the jobs in the United States pay less than that amount. That may not sound too bad; after all, $18 an hour works out to more than $37,000 a year, well above the federal poverty level for a family of four. But consider that the vast majority of the jobs under the median hourly wage actually pay much, much less, around $15 an hour or less. Hundreds of thousands of those jobs, in fact, don’t even pay minimum wage.

WHAT IS THE MINIMUM WAGE?

The federal minimum wage is currently set at $7.25 an hour. That hasn’t changed since 2009. However, many states and even some municipalities have set the minimum significantly higher; for example, Colorado currently requires employers to pay a minimum wage of $10.20 an hour, which is scheduled to increase to $11.10 an hour in 2019 and $12 an hour in 2020. Workers are entitled to receive whichever is highest among the federal, state, and local minimum wage requirements.

Yet thanks to special exemptions in the law, there are several types of jobs that don’t have to pay the prevailing minimum wage. Government statistics indicate that there are roughly 1.7 million Americans making less than minimum wage because of those exemptions – nearly twice as many workers as there are earning right at the minimum wage level.

The Wage and Hour Division of the U.S. Department of Labor is responsible for enforcing the minimum wage. However, the Fair Labor Standards Act, the law that governs wage requirements, carves out exceptions for certain kinds of employment. Some of the exemptions apply to specific classes of workers, such as young trainees, who are arguably getting other benefits from the work besides a paycheck.

If a new hire is less than 20 years old, the FLSA allows employers to pay that employee as little as $4.25 an hour during the first 90 days (as long as that hire is not displacing another worker). There’s also an exemption that allows student workers to earn 85 percent of minimum wage at jobs designed to accommodate their studies, as well as programs for workers with disabilities and “student learners” who are taking shop courses.

But some exemptions exist mainly to support types of businesses that depend on a cheap labor force. Agricultural jobs can in some instances pay less than minimum wage; young workers on small farms, working with parental consent, may also be exempt from child labor provisions. Seasonal jobs that typically go to temporary workers – such as working at an amusement park, a ski resort, or some other recreational enterprise – might also meet the FLSA exemption criteria. The same goes for babysitters (unless they are full-time child care workers), employees of the fishing industry, the people who deliver newspapers, and some other niche businesses.

By far the greatest confusion over minimum wage requirements involves “tipped employees” and independent contractors. Federal law allows employers to pay a much lower base wage — as low as $2.13 an hour — to those employees who collect a portion of their compensation from tips. (Many states have their own minimum requirements for what the employer is expected to pay the tipped, exceeding the federal minimum.) Studies suggest that restaurant and food service employees do generally manage to meet or exceed the minimum wage through these arrangements, and some make much more. But the current median income for food and beverage servers and related personnel is just over $20,000 a year.

In addition to the millions of restaurant workers who are not subject to minimum wage requirements, millions of independent contractors have no federally protected claim to a minimum wage, either. Just who is an independent contractor can be a complicated topic; the Internal Revenue Service tends to consider such factors as whether you can choose your own hours and work for more than one client at a time. But it’s estimated that up to one third of the workforce, from white-collar professionals to skilled trades to free-lance artists and consultants of all stripes, are essentially self-employed participants in a gig economy. That means you have to pay your own taxes, arrange for your own health care and benefits — and have no guaranteed minimum wage.

WHAT CAN BE DONE ABOUT WAGE AND HOUR VIOLATIONS?

The Department of Labor website offers a handy reference guide to various aspects of the Fair Labor Standards Act, dealing with questions about who is covered by the FLSA, minimum wage exemptions, overtime pay, and more. If you feel you are not being treated fairly by your employer, you can file a complaint with DOL and seek an investigation. Depending on the complexity of the situation, such as disputes over overtime and rest breaks, timely payment of commissions, or being classified as a salaried or an hourly employee (or an independent contractor), you may also want to consult an experienced employment lawyer.

THE WAGE AND HOUR ATTORNEYS AT FDAZAR

Franklin D. Azar & Associates is well known for fighting for the rights of working Americans in disputes with their employers and large corporations. Over the past 30 years, FDAzar has secured over $1.5 billion in compensation for our clients, including more than $750 million from Walmart in a wage and hour dispute that involved hundreds of thousands of class action participants and litigation in 26 states. FDAzar has been and is involved in mass tort and class action cases against other large corporations, including Toyota, Hewlett Packard, and British Petroleum.

If you have suffered damages as a result of unfair business practices, data breaches, or corporate misconduct, the attorneys at FDAzar may be able to help. Need more information? Speak with a member of our team today or contact us here. The consultation is free.