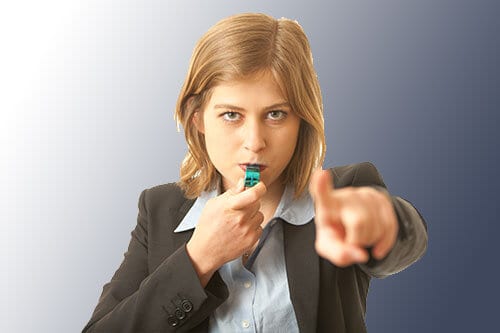 A few weeks ago the Securities and Exchange Commission (SEC) announced that it was paying substantial awards to two private individuals who had assisted the agency in a major enforcement action. One of the two received payment of $15 million; the other received $39 million. All of the money came from fines paid by a major company that had been caught violating securities laws.

The SEC declined to reveal the identities of the two recipients. It didn’t reveal any details of the investigation, either, or the name of the major company that was involved, out of concerns that it would compromise the anonymity of its sources. All we really know about the pair is that they are whistleblowers.

WHAT IS A WHISTLEBLOWER?

Anyone who has credible inside knowledge about possible fraud, corruption, kickbacks, or other illicit activity within a private business, a nonprofit organization, or government agency is a potential whistleblower.

Some whistleblowers work with federal investigators to expose their employer’s misuse of public funds, such as a defense contractor who’s supplying substandard aircraft parts or a hospital that’s submitting inflated Medicare billings. Some turn to the media or file lawsuits to challenge what they consider to be unethical or dangerous business practices.

Whistleblowers can have a range of motives for sounding the alarm. They may be acting primarily out of conscience, eager to stop a company that’s damaging the environment, cheating on their taxes or bilking the government. They may have been retaliated against for raising concerns internally and are now seeking justice and vindication.

Many government agencies also offer a range of incentives for whistleblowers to come forward, including cash rewards for information or a fee based on a percentage of money recovered as a result of a whistleblower’s complaint.

One powerful weapon for whistleblowers is the federal False Claims Act, a statute that allows persons with knowledge of fraud (or “false claims” submitted to the government for payment) to sue the wrongdoer on behalf of the United States of America. The government has the option of intervening in the case and bringing its own sizable resources to bear, while rewarding the whistleblower, too; if it declines, the person who brought the action can pursue it on his or her own and personally collect a substantial share of any funds recovered.

Cases involving insider trading or other types of securities violations can have an impact on thousands of investors and involve sums stretching into hundreds of millions of dollars. Many investigations of such violations, though, rely heavily on tips from whistleblowers – people on the inside of the deal.

The SEC is authorized by Congress to pay monetary awards to individuals who come forward with key information in cases where the sanctions imposed exceed $1 million, with the typical compensation ranging from ten to thirty percent of the funds collected. Since the Office of the Whistleblower program began in 2012, the SEC has awarded $326 million to 59 individuals and collected $1.7 billion in sanctions based on their information. No money is taken from harmed investors in order to pay the whistleblowers.

One consideration in such cases has to do with the timeliness of the information provided; did the informant contact the authorities when he or she first learned of the wrongdoing, or at some later date? Whether the informant benefited from the scheme is also a factor in what sort of compensation might be offered.

Although there are laws that are designed to protect whistleblowers from retaliation by their employers, many whistleblowers are still targeted for demotion, reassignment, harassment or termination as a result of airing their concerns; sometimes the employment dispute can only be resolved through aggressive legal action.

In addition, different government agencies have varying procedures regarding the filing of whistleblower complaints, claiming compensation, preserving anonymity, and so on; the process requires an experienced guide familiar with the complexities of the False Claims Act, securities regulations, the Foreign Corrupt Practices Act, and other relevant law.

Furthermore, the complexity of a security fraud case may have legal exposure for a whistleblower’s personal action or inaction. In these circumstances, it is essential to consult with an experienced SEC whistleblower attorney before disclosing the information.

Increasingly, government regulators and lawmakers are recognizing the important role whistleblowers play in exposing fraud and corruption. Yet for whistleblower claims to be effective, those sounding the alarm need to know they will be rewarded, not penalized, for their efforts. Solid support from experienced whistleblower attorneys can make all the difference.

THE WHISTLEBLOWER LAWYERS AT FDAZAR

The legal team at Franklin D. Azar & Associates has successfully litigated against national and local law firms in large-scale, complex cases nationwide. Our whistleblower lawyers handle a wide variety of legal matters in Colorado and beyond, including cases on behalf of Commodity Future Trading Commission whistleblowers, Securities Exchange Commission whistleblowers, and Qui Tam (False Claims Act) whistleblowers. If you have information regarding commodities law violations, securities fraud, or fraud against the U.S. government, you could be rewarded for exposing it. Please contact us here or by calling 800-716-9032 for a free and confidential evaluation of your claim.