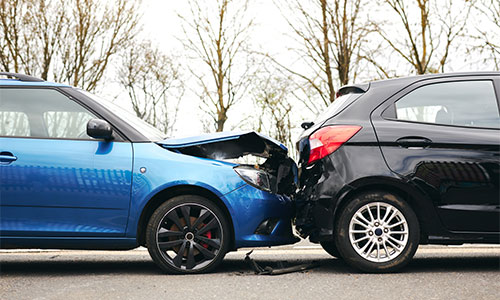 What You Need To Know About Rear-End Collisions

The most common type of traffic accident is also one of the most preventable ones. According to data collected by the National Highway Traffic Safety Administration, nearly a third of all car crashes are rear-end collisions, resulting in thousands of injuries and fatalities each year. In the majority of these wrecks, the lead vehicle was stopped or moving very slowly at the time it was struck from behind by another vehicle.

Even at low speeds, the impact of a rear-end collision can have serious, life-changing consequences. It can lead to a chain reaction of rear-end crashes by other vehicles as well. But many of these incidents could be avoided if drivers would only take more care to protect themselves and others on the road.

WHY SO MANY REAR-END CRASHES?

Many factors can contribute to a rear-end collision, but the most frequent cause is the failure to maintain a safe distance from the lead vehicle — in other words, tailgating. The National Safety Council recommends keeping at least three seconds of reaction time between you and the vehicle ahead, which you can clock by picking some stationary sign or landmark that the vehicle passes and counting how many seconds it takes for your vehicle to reach the same point. (If it’s less than three, you’re following too close.)

The three-second rule may not be sufficient in all situations, but it’s a handy benchmark and keeps you aware of how traffic is moving around you. That’s critical since other frequent causes of rear-enders include speeding, distracted driving, and bad weather. If you’re not paying enough attention to road conditions and slowdowns ahead, you’re far more likely to end up plowing into a stopped vehicle.

WHO IS AT FAULT IN A REAR-END COLLISION?

In almost all rear-end crashes, the party that crashed into another vehicle from behind is going to be considered responsible for the crash. That person might claim that the lead vehicle braked too suddenly for the crash to be avoided, but most of the time it’s likely that the second driver is going to be found to have followed too closely. There are exceptions, of course; if the lead vehicle’s brake lights don’t work, for example, or someone cut recklessly in front of you, or icy road conditions contributed to the crash, you might have some defense. But keeping a safe distance is every driver’s responsibility.

WHAT HAPPENS IF YOU ARE REAR-ENDED?

Rear-end crashes are leading cause of whiplash injuries, which can include neck and head pain, stiffness, headaches, dizziness, ringing in the ears, pain in the jaws, back, shoulders, or arms, or a general sense of tenderness, soreness, and fatigue. In many cases, the pain may not be apparent in the immediate aftermath of the accident and may only manifest many hours later. The impact can also result in herniation, soft tissue damage, fractures, soft tissue damage, and other injuries; passengers in the back of minivans are considered particularly vulnerable to injury or death because of the short “crumple zone” in such vehicles.

HOW CAN REAR-END CRASHES BE AVOIDED?

It’s impossible to control the behavior of other drivers, of course, but there are steps you can take to try to protect yourself from being rear-ended. First, make sure your brake lights and brakes are working properly. Signal your intentions clearly to drivers behind you and avoid stopping abruptly whenever possible. If you detect someone who’s tailgating, speeding, driving aggressively, or being inattentive behind you, don’t engage in any provoking behavior, such as braking frequently to call attention to the tailgating. Instead, pull over when it’s safe to do so, let them pass, and keep your distance.

For more than thirty years the attorneys at Franklin D. Azar & Associates have helped thousands of injured people obtain complete and timely compensation for their losses. Our proven track record and expertise have allowed us to grow into the largest personal-injury law firm in Colorado, with offices in Denver, Aurora, Thornton, Fort Collins, Greenwood Village, Colorado Springs, and Pueblo. If you’ve been injured in a bus, car, truck, or motorcycle accident, you may be entitled to compensation.  Please call the car accident attorneys at FDAzar day or night at (800) 716-9032, or contact us here for a free consultation and no-obligation evaluation of your case.