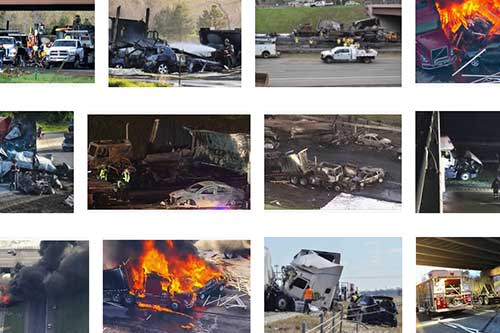 What Did We Learn from the i-70 Truck Crash?

The fiery, horrific images made national news. On April 25, 2019, traffic stalled along I-70 west of Denver became the scene of an inferno as a seemingly out-of-control semi-trailer crashed into the line of cars and trucks at high speed, causing four deaths and numerous injuries.

The 23-year-old driver of the semi, Rogel Lazaro Aguilera-Mederos, has been charged with four counts of vehicular homicide and dozens of counts of assault and attempted assault. Investigators say he told them that his brakes had failed on the steep descent into the metro area from the mountains and that he closed his eyes, bracing for death, before hitting the stopped traffic.

The shocking incident has generated widespread discussion about how to improve truck safety and prevent future tragedies. And, while crashes such as this one are extremely unusual, it’s also cast a spotlight on a disturbing trend — a sharp increase in fatal accidents involving big rigs, despite tougher monitoring and inspection processes.

Large trucks are involved in less than fifteen percent of fatal crashes, according to data gathered by the National Highway Traffic Safety Administration. But that figure is on the rise. A recent article in the Denver Post pointed out that the number of truck-related fatal crashes has increased by 42 percent since 2009, accounting for close to 4800 deaths across the nation in 2017. In Colorado, the number of fatal truck crashes has more than doubled in that period, from 35 in 2009 to 80 in 2017.

Most of the fatalities involved are not the truck operators but people in other vehicles involved in the crash. It’s a simple matter of physics; big rigs are 20-30 times heavier than passenger cars, with much greater ground clearance, and the occupants of the smaller vehicle tend to suffer greater injuries in any collision between the two.

In fatal car-truck crashes, an astonishing 97 percent of those killed are occupants of the car.

What Are the Leading Causes of Fatal Truck Accidents?

Driver error is often listed as the primary reason for many truck crashes. In the I-70 case, for example, questions have been raised about why Aguilera-Mederos sped past runaway truck ramps on the way down from the foothills that are designed to help drivers whose brakes are burned out.

But “driver error” also refers to the drivers of other vehicles. Various studies suggest that the drivers of passenger vehicles, not truck drivers, are at fault in roughly four out of five driver-error crashes involving trucks. The data indicates “a need to improve trucker defensive driving techniques, such as keeping a safe distance from other vehicles, being patient with slower or reckless drivers, and using turn signals,” says an industry website.

Other commonly cited causes include equipment failure, bad weather, inadequate maintenance, and improper cargo loading — all of which make the question of liability more complex for injured victims, since they may involve fault on the part of the company or the manufacturer rather than the driver.

Driver fatigue is also an issue; although government regulations establish how many hours a day a single driver can operate a large truck, some drivers (and their companies) ignore hours-of-service limits.

What Can Be Done?

In the wake of the I-70 crash, some regulators and lawmakers are reassessing the current oversight and training requirements for truck drivers. The trucking company that employed Aguilera-Mederos had reportedly had several brake violations in prior inspections in other states, and the driver himself could possibly have benefited from more specific training in how to drive Colorado’s steep downgrades.

What Are the Best Practices to Avoid Accidents with Trucks?

There is also more that drivers of passenger vehicles can do on an individual basis to reduce the chances of being involved in a truck accident.

Keep in mind that a fully loaded tractor-trailer can take 20 to 40 percent longer than a car to stop, so give every truck a wide berth while passing.

Stay out of the truck’s blind spots. Don’t attempt any maneuver that will impair the truck driver’s ability to see you or react, and keep your distance, especially in bad weather.

If safety can be the top priority of everyone on the road, the chances improve that we’ll all get home safely.

For more than thirty five years the truck accident lawyers at Franklin D. Azar & Associates have helped thousands of injured people obtain complete and timely compensation for their losses. Our proven track record and expertise have allowed us to grow into the largest personal-injury law firm in Colorado, with offices in Denver, Greenwood Village, Colorado Springs, and Pueblo.

If you or a loved one has been injured by an accident involving a tractor-trailer, semi-truck, or other commercial vehicle, FDAzar can help. We have experienced truck accident lawyers ready to review your case with you. And we have the dedication to our clients to ensure that your claim will be handled efficiently and aggressively so that you can get the recovery you deserve. Call us day or night at 720-372-1162 or or contact us here for a free consultation and no-obligation evaluation of your case.