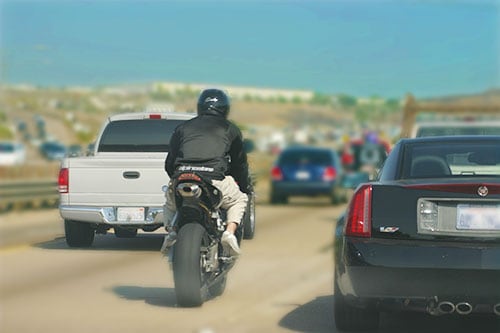 Is Lane Splitting Legal in Colorado?

Motorists are often urged to “share the road.” That’s generally good advice, especially in congested areas, where many types of vehicles are trying to get somewhere at varying speeds.

But there’s one type of road-sharing that’s become a source of controversy, sparking debates about safety and focusing a spotlight on the vulnerability of motorcyclists in car-dominated traffic. It’s called lane splitting.

WHAT IS LANE SPLITTING?

Also known as “filtering,” “whitelining,” “stripe-riding,” or “lane sharing,” lane splitting is the practice of riding a bicycle or motorcycle between lanes of slow-moving or stopped traffic. It’s a way of maneuvering around congestion by taking advantage of the openings between larger vehicles than your own, using the space between lanes or the road shoulder to progress.

Lane splitting is common in many countries, where dense traffic and a significant number of two-wheeled vehicles have made the practice not only acceptable but essential for getting around.

In the United States, though, lane splitting is often regarded as risky business. While proponents say it’s safer for motorcyclists than riding down the middle of a heavily used, stop-and-go traffic lane, reducing the possibility of being rear-ended by a car or truck, other motorists can become alarmed or annoyed by cyclists passing them between lanes. Questions about safety and liability abound.

IS LANE SPLITTING LEGAL? Is lane splitting allowed with a motorcycle?

At present, lane splitting is explicitly permitted by law in only one state: California.

Other states either prohibit the practice or don’t really address it, leaving it up to individual officers to consider whether the lane splitter is driving recklessly. Many allow lane sharing for two motorcycles but not lane splitting.

According to the Colorado Department of Transportation, “Passing or overtaking a vehicle in the same lane is illegal in Colorado; no lane sharing or splitting with cars. However, motorcycles can share a lane or ‘co-ride’ with one other motorcycle.”

Since lane splitting is illegal in most of the country, it’s likely that some degree of liability may be attributed to any motorcyclist who’s involved in an accident while splitting lanes. But each situation is different, and the best course is always to avoid situations that are likely to result in an accident.

For motorcyclists, that means exercising great caution and patience in congested conditions, obeying traffic laws, avoiding a position in other drivers’ blind spots, and clearly signaling your intentions.

For other motorists, it’s imperative to be aware of your surroundings at all times, to allow plenty of braking distance for motorcycles, and to avoid startling or cutting off riders who are trying to maneuver around slow-moving traffic. Whether you firmly believe you’re “in the right” or not, sharing the road can save lives and legal quandaries.

THE CAR ACCIDENT LAWYERS AT FDAZAR:

For more than thirty years the attorneys at Franklin D. Azar & Associates have helped thousands of injured people obtain complete and timely compensation for their losses. Our proven track record and expertise have allowed us to grow into the largest personal-injury law firm in Colorado, with offices in Denver, Colorado Springs, Pueblo, and Trinidad. If you’ve been injured in a car, truck, or motorcycle accident, you may be entitled to compensation.  Please call the car accident attorneys at FDAzar day or night at 800-716-9032 or contact us here for a free consultation and no-obligation evaluation of your case.