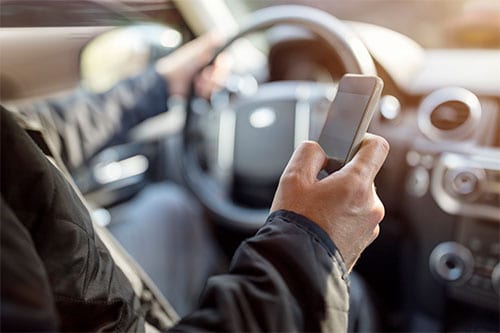 Distracted Driving, Part 1: How Does Texting and Driving Affect Others?

Study after study of traffic accidents in the United States and elsewhere have identified many different causes but one common theme: carelessness. Although some accidents may be unavoidable — the result of bad weather or poor road conditions, for example — the vast majority are preventable. In fact, the data indicates that human error accounts for more than 90% of all crashes.

Some common forms of “human error” include excessive speed and driving while intoxicated. Increasingly, though, another driving behavior is proving to be a significant factor, in part because many drivers don’t realize how dangerous it is.

Distracted driving, a term that scarcely existed a few years ago, now plays a role in thousands of accidents every year. According to the National Highway Traffic Safety Administration, distracted driving was involved in nearly one in ten of all fatal traffic accidents in the U.S. in 2017. And approximately fifteen percent of accidents resulting in injury are classified as being “distraction-affected” as well.

Many experts believe the NHTSA figures are only a baseline, at best, since the distractions that contributed to an accident may not be immediately apparent or properly reported.

According to the Colorado Department of Transportation (CDOT), every day 43 crashes involve distracted drivers in Colorado.

Distraction can come in many forms, from fiddling with a cell phone or climate controls to eating while driving or arguing with passengers. In this three-part series, we will examine some of the disturbing trends regarding distracting driving — and ways to avoid becoming another statistic.

Let’s start with one of the most dangerous things you can do while operating a motor vehicle: Texting.

What Texting and Driving Do to Response Times?

Tapping out a quick note to a friend that you’re running late or changing plans may seem simple enough. But any activity that diverts your attention away from the road, even for just a few seconds, is inviting trouble. Five seconds of texting while traveling at 55 miles per hour takes your eyes off the road for the length of an entire football field —and a lot can happen over that amount of time and distance.

Texting is particularly dangerous because it involves three types of distraction:

A University of Utah study suggests that talking on a cell phone while driving impairs response times as effectively as drinking enough alcohol to exceed the legal limit. That conclusion has been challenged by other research, but there is widespread agreement that texting is far more “involving” than talking on a cell phone.

Another study indicates texting can make the risk of a crash 23 times higher than non-distracted driving.

A Crackdown on Texting and Driving

Concerns over distracted driving have led to waves of legislation regarding cell phone use while driving.

Eighteen states prohibit all drivers from using handheld phones while driving. No state bans all cell phone use while driving, but many have put restrictions on “novice” drivers.

And text messaging while driving is illegal in all but two states, Montana and Missouri — and even Missouri bans texting by novice drivers.

Crashes involving teen drivers distracted by cell phone use, including texting, tend to be proportionally higher than in any other age group.

What Can Be Done?

Growing awareness of the dangers of texting while driving have led to a number of initiatives to combat the problem, from an official government campaign to new policies by employers to encourage their workers to put away their cell phones while driving.