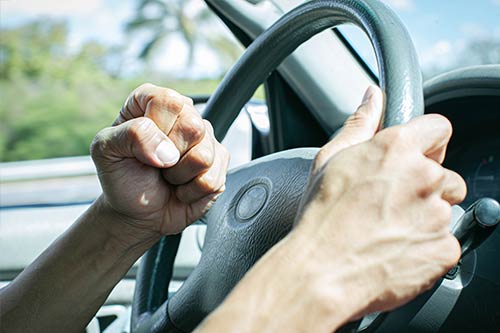 One of the challenges of going back on the road after a global pandemic is that traffic conditions are likely to be unpredictable and changing rapidly. During the shutdown, the light volume of cars prompted some drivers to pay even less attention than usual to posted speed limits, risking high-speed crashes. Now that congestion is increasing again, we can expect to see more impatience, frustration, and aggressive driving out there.

Possibly because of its rapid population growth and lagging infrastructure, Colorado has one of the highest reported rates of road-rage incidents in the country. According to 2016 data compiled by the National Highway Traffic Safety Administration — the most recent figures available — nearly one in ten Colorado traffic fatalities was due to aggressive driving. The state had 53 deaths from road-rage incidents that year; only three states (Indiana, South Carolina, and Alabama) had more. Despite the fact that most non-fatal incidents are never reported to law enforcement, the Colorado State Patrol logs a staggering 80,000 calls a year to a special hotline for aggressive-driving and drunk-driving complaints. That’s more than 200 a day!

No one has the ability to compel others to drive safely and responsibly. But there are steps you can take to try to minimize your encounters with ill-tempered drivers and de-escalate confrontations before they spiral out of control. Here are some tips on ways not to become another casualty of the road-ragers.

The Triggers of Road Rage

The NHTSA makes a distinction between aggressive driving and road rage. The agency defines aggressive driving as reckless behavior behind the wheel, such as speeding or refusing to let another car pass you, while true road rage involves some form of “violent intent” toward another driver.  Yet clearly, any form of aggressive driving can quickly turn violent; whether the damage was actually “intended” or the result of recklessness isn’t going to make much difference to those who are injured in a crash.

Studies suggest that many road rage incidents are triggered by common annoyances that occur in traffic all the time: A failure to signal a lane change. A perception that a driver ahead is moving too slowly, or that one behind you is following too closely and should be “taught a lesson” for tailgating. Distracted driving is another common complaint.

Some potentially dangerous encounters with other motorists can be avoided entirely by taking a few precautions before you set out on the road and practicing simple courtesy. Give yourself plenty of time to reach your destination, so that you won’t be vying with other anxious drivers for the speediest lane. Turn off the cell phone, give others a wide berth and signal to alert other drivers before changing lanes. Don’t fret over someone “cutting you off” or “stealing” your parking space; there are plenty of other spaces ahead. By not behaving aggressively yourself, you’re less likely to provoke challenges from others.

Of course, even the best behavior can be rewarded with rudeness. Even if you’re not in the wrong, a simple wave of acknowledgement can sometimes defuse a dispute. But if another driver insists on harassing you, experts agree that the best course of action is not to engage. You may feel provoked by someone gesticulating, shouting, or honking at you, but it won’t help matters to let your emotions dictate your response. Avoid eye contact and put distance between your vehicle and the aggressor — not by speeding, but by letting the other vehicle get well ahead of you or by taking a different route.

If the other driver continues to pursue you, don’t go home. And don’t get out of your car to “settle things.” Call 911 and head for the nearest police station. If you’re able to break away from the situation but still consider the other driver’s behavior dangerous enough to report, take note of the vehicle’s license plate, make and model; when you can do so safely, call the Colorado State Patrol aggressive driving hotline (*277 on your cell) to report the incident.

In many, many cases, your own attitude can play a significant role in whether a potentially deadly encounter escalates or evaporates. Keep calm, avoid confrontations, and you’re likely to finish your commute in much better shape, physically and mentally.

The Car Accident Attorneys at FDAZAR

For more than thirty years the attorneys at Franklin D. Azar & Associates have helped thousands of injured people obtain complete and timely compensation for their losses. Our proven track record and expertise have allowed us to grow into the largest personal-injury law firm in Colorado, with offices in Denver, Aurora, Greenwood Village, Colorado Springs, and Pueblo. If you’ve been injured in a bus, car, truck, or motorcycle accident, you may be entitled to compensation.  Please call the car accident attorneys at FDAzar day or night at 800-716-9032 or contact us here for a free consultation and no-obligation evaluation of your case.