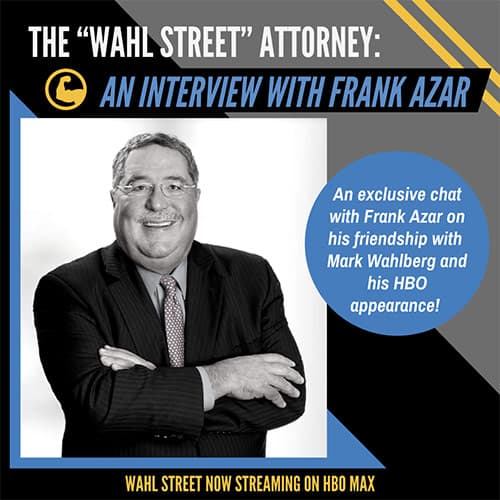 The “Wahl Street” Attorney: An Interview with Frank Azar

Streaming on HBO Max, the six-part reality series “Wahl Street” follows global superstar Mark Wahlberg as he attempts to expand his business empire while juggling family and film industry obligations. If you’ve checked out the series, you may have caught a glimpse or two of a familiar face; yes, that’s attorney Franklin D. Azar conferring with investors on Zoom. How did this happen? We tracked down the founder of Colorado’s largest plaintiff-centered personal injury law firm for a question-and-answer session to find out.

How did you get involved in “Wahl Street”?

My friend Mark Wahlberg asked me if I wanted to be involved. He’s been a very good friend for the past eight or nine years. We’ve played golf together and traveled the world.

How would you describe the series?

It’s kind of a combination of “Entourage” and “Shark Tank”— you have people in the entertainment world talking about investments, figuring out the best businesses to get involved in and give back to the community. I’m the only lawyer on the show. I’m also an investor in F45, the fitness chain, in which Mark’s investment group has a stake.

We haven’t seen all of the episodes yet. Will there be more of Frank Azar in the later installments of the series?

As with any reality series, it’s hard to say what made the cut and what didn’t. I haven’t seen the whole series myself yet.

People in Colorado know you from your legal work in personal injury and class action cases. Does your experience in these areas play a role in the show in any way?

I think so. Some of the projects we’ve looked at have applications for people who have been injured. And having worked with people from so many different walks of life, I believe I bring a perspective that adds value to the discussion.

What about Mark Wahlberg? What does he bring to the show?

Star power. That, and he’s one of the smartest people I’ve come across. He’s very savvy, but he also listens to other people’s opinions.