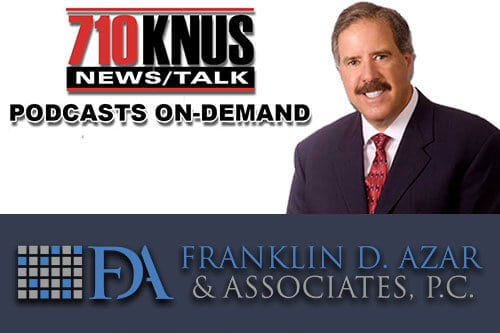 Saturday August 18th Frank Azar was interviewed on Craig’s Lawyers’ Lounge. Follow the link to listen to the full interview and find out more about The Strong Arm.

The Interview Summary and Highlights

Frank: Thanks for having me, Craig. It’s been tough getting here.

Craig: Well, tell everybody the Frank Azar story. And does it have anything to do with Trinidad, Colorado?

Frank: Well, that’s where I grew up. My dad was a lawyer there, went to Harvard Law School and I grew up there and then I went off to Canyon City, Abby. I don’t know if you know, it’s not there anymore as a Catholic boys’ boarding school.

Craig: How long did you know you wanted to be a lawyer?

Frank: Probably ever since, eighth grade when I knew I wasn’t very good at math. And I always wanted to be like my dad and that’s why I went into law.

Craig: How many lawyers in the Azar firm right now?

Frank: Oh, I have over 55 lawyers right now, and ever increasing. I think we just hired like four or five more.

Craig: People know you from your public persona. I know you a little personally, but I also know that Colorado Trial Lawyers Association (CTLA) of which I’m a proud member. They benefit from your large chest here, big contributor to CTLA and lawyers causes. Why do you do that Frank?

Craig: Right. I imagine you get some business when people come up to you and talk about their needs, ex. got hit by a car last night.

Frank: That’s true. I try to help everybody out and you know once they do recognize me. But sometimes people ask me about all kinds of legal questions about areas I have no idea about, divorce or criminal law or something like that. I say I only do personal injury. If you’ve been in a car wreck I can help you, but other than that I really can’t.

Craig: Do you do any mass torts cases as well?

Frank: We do a lot of pharmaceutical drug and medical devices. We’ve done a lot of hip and knee cases, a lot of bad drug cases, and we do a lot of class action cases.

Craig: So let’s find out about Frank Azar personally, I mean, do you listen to talk radio? What do you watch on television? What stations? Are you into the news or sports or what?

Frank: I watch a lot at MSNBC and CNN.

Craig: What about sports? I see you are the official attorney for the Denver Broncos.

Frank: No, I wouldn’t say that. I tried a case against Riddell, for a helmet that they made nine years ago.

Craig: Was this trial in southeastern Colorado near where you grew up?

Frank: It was in Trinidad. It was the revolution helmet, which they no longer made. A Trinidad kid got hurt when he wore the helmet. It was a very serious injury. He was hemiplegic paralyzed on his left side in a very severe injury to the frontal lobe of his brain. You know, I do a lot of brain injury work. In over the 38 some years I’ve been practicing law, it was one of the worst brain injuries I’ve ever seen. Because it affected the victim’s ability to control his impulses. Sometimes we see these really bad brain injuries where people were, you know, they were down at Craig (Hospital) and they’re totally in a vegetative state. But this case, he couldn’t control his impulses. So like his mother may be driving down the highway at 60 miles an hour and he would just decide to open the door.

Craig: So you won that case for them. (Frank: Yes, we did.) So what are the changes to the law, or the way they make helmets?

Frank: Well, what they did is they changed how they test helmets now. I think the problem with helmets is people don’t understand that helmets don’t prevent concussions. The concussions are caused by a rotational movement of the head. So they’re really designed to basically stop a translational concussion, which is the helmets hitting together.

Craig: There are so many famous cases you’ve handled, but you have a big one in Denver, which made the news. An FBI agent named Chase Bishop was, had a local watering hole when he decided to show up is dancing ability. He did a backflip, lost his handgun, tried to pick it up, and it discharged into your client, Tom Reddington. What can you tell us about their situation?

Frank: It’s a real tragedy and Tom’s hurt really bad. You know, a lot of people kind of laugh about it, but it hit his artery. If it was just four inches up, he would have bled out. Thank God. One of the patrons that was there took off his belt and put it on Tom’s leg or he would have bled out. And the artery can’t be fixed. It’s going to have all kinds of serious problems. You know, my client feels bad about what happened to this guy, but you know, I want to tell people it’s FBI policy for the agents to carry a round in the chamber with no safety online with that gun that the lock, the only safety on that firearm is not to pull the trigger.

Craig: So what do you want to happen to Chase Bishop the FBI Agent? Should he go to jail?

Frank: Well, I hope he gets compensated fairly. He’s also a former Green Marine on top of it all. I think you know, everybody makes mistakes and I don’t think he should lose his entire career in everything over something that you’re making a mistake like this. My client is not seeking vengeance and he just wants to be fairly compensated. He doesn’t feel anything punitive should happen to this agent.