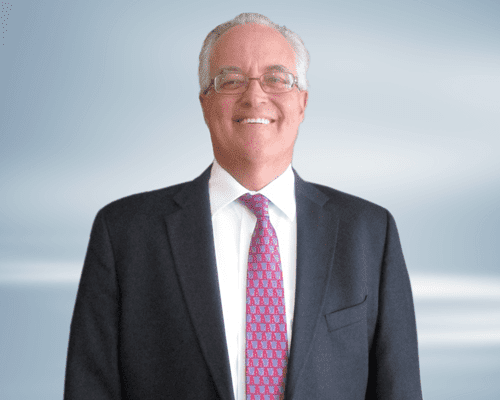 Working for the same employer over a number of years can all too often turn into a dreary routine. But Darwin Burke, who’s worked at Franklin D. Azar & Associates for the past 32 years, has taken on so many jobs and challenges at the firm over that epic and eventful period that he’s never found “routine” to be a problem.

“Flexibility is an important attribute in the legal arena,” Burke says. “Every day there’s something new you have to tackle and conquer. I learn something new every day.”

Born in Iowa and raised in Illinois, Burke had plans to pursue law school after completing his undergraduate degree, majoring in political science and history, at Illinois State University. But flexibility was a must from the outset. He took a position as executive vice president at the Rock Falls Chamber of Commerce, which led to a similar position in Dixon, Illinois — right at the time that Dixon was drawing national attention as the hometown of recently elected President Ronald Reagan. Burke fielded media inquiries from around the world and became involved in fundraising efforts to restore Reagan’s childhood home.

He then moved to Denver and decided to become a paralegal, attending the Denver Paralegal Institute, one of the top schools of its kind in the country. He was introduced to Franklin Azar and, on July 1, 1989, became an employee of his firm.

“Frank had a lot of impressive qualities that I could see just from that first meeting — the honesty, the integrity, doing the best you possibly can for your clients,” Burke recalls. “And he had a great business mind. I knew from the start that this firm was going to expand. How big, you don’t know. But that’s one of the things Frank has always done well: find people who can work together to grow the business and try new things.”

As Franklin Azar & Associates grew over the next three decades to become the largest plaintiff-centered personal injury law firm in Colorado, Burke’s role expanded considerably. He was hired as a paralegal but was soon doing liaison work with IT specialists to keep the firm ahead of the upheavals in computer technology. He worked with marketing and human resources, and eventually took over training of new employees in case management procedures. (Some of his former trainees are now training others.) Officially, his title is “administrator,” but he’s become an essential troubleshooter, planner, and motivator in various aspects of the business: “I’ve basically done everything in the office, other than being an attorney.”

Burke says his “thirst for knowledge” has kept him going over the years — that, and the strong personal relationships he’s formed with staff members and attorneys.

“Frank and I have known each other for more than 32 years,” he observes. “I consider him a very close friend as well as my employer. We’ve had a lot of fun building this business. A lot of hours, sure. A lot of work. But we’ve had our fun, too.”