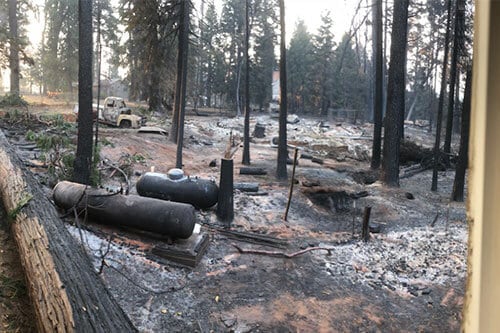 A class action lawsuit filed late last week on behalf of victims of the Camp Fire claims that Pacific Gas & Electric Co. is responsible for sparking the deadliest wildfire in California history.

Since it first erupted in Butte County on November 8, the Camp Fire has resulted in at least 77 deaths, burned more than 150,000 acres and destroyed more than 10,000 homes. Officials say the cause of the blaze is still under investigation, but the lawsuit, filed by Franklin D. Azar & Associates and Garner & Associates, cites multiple reports of problems with a high-voltage power line operated by PG&E 14 minutes before the fire began and a vegetation fire under the utility’s power lines at the point of ignition.

This is not the first time PG&E’s equipment has been linked to wildfires in Butte County. PG&E agreed to pay more than $24 million in damages to Butte County residents in the 2015 Butte Fire, and the troubled utility is also facing billions in potential liability over 2017 wildfires in Northern California. The lawsuit complaint contends that the circumstances that produced the Camp Fire were foreseeable and preventable, but that “PG&E has a long history of disregarding safety regulations in order to maximize its own corporate profits” — by, for example, failing to trim trees near power lines or initiate power shutoffs in particularly hazardous fire conditions.

Two days before the Camp Fire started, PG&E announced on Twitter a possible Public Safety Power Shutoff planned for November 8, as a result of high winds, low humidity and dry vegetation. Yet the shutoff never occurred.

The lawsuit was filed in Superior Court in Butte County on behalf of several residents who lost homes and other property in the Camp Fire and others similarly situated. “We encourage people affected by the Camp Fire to not respond to robocallers, but to contact the Butte County Bar Association or your local attorney first,” said Ivy Ngo, head of the class action team at FDAzar.

These two plaintiff law firms worked closely together protecting the interests of Butte County residents after last year’s October 8th fires. There is significant concern right now regarding lawsuits relating to the Camp Fire being filed by Bay Area firms in San Francisco County. “For us, these fires have devastated family and friends,” said John Garner of Garner & Associates. “Nothing substantial about this fire occurred in San Francisco County. When the time is right for litigation, a Butte County judge should protect the victims of this fire.”