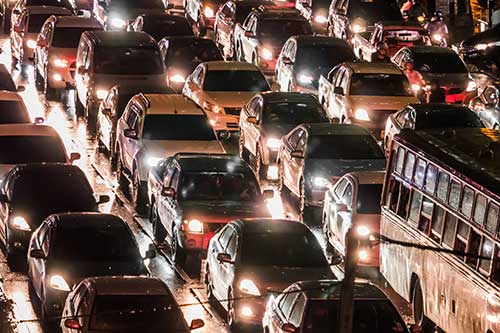 Who Is at Fault in a Multi-Car, Rear End Collision?

We’ve all seen them on the nightly news, those “chain reaction” wrecks on a busy highway that involve multiple vehicles crashing into each other. If you’re lucky, you’ve never actually been in one.

Such collisions can be deadly. Even if you emerge relatively unhurt, determining who’s at fault for the damages caused can be an extremely complicated process. Every case is different, but there are some common-sense considerations involved in fixing liability in multi-car, rear-end crashes — and some steps you can take that will increase your chances of avoiding such a pileup.

In a high percentage of rear-end wrecks involving just two vehicles, the driver of the rear vehicle is considered to be at fault. That driver may have been speeding, not paying attention, or heedlessly tailgating; in many instances, the rear driver ends up with a citation for “following too close.”

In Colorado, the relevant statute states that “the driver of a motor vehicle shall not follow another vehicle more closely than is reasonable and prudent, having due regard for the speed of such vehicles and the traffic upon and the condition of the highway.”

But don’t assume that the rear driver is automatically liable in all possible scenarios. There are certain situations in which the lead driver could be at least partially at fault for the collision — particularly if that driver is intoxicated, distracted, or otherwise driving recklessly.

In other cases, there may have been a sudden change in road conditions (black ice, for example), the behavior of a third party (a breakdown or medical emergency up ahead that causes the lead driver to slam on the brakes), or some other factor involved that could complicate the liability question. In some instances, it might turn out that neither driver is found to be at fault for a rear-end collision because the actual cause is some immediate and unexpected hazard.

In “chain reaction” wrecks involving three or more vehicles, the same general principle holds true as in two-car, rear-end collisions: the rear driver has an obligation to keep a reasonable distance behind the cars ahead and be alert for changing speeds and traffic conditions. But when a chain-reaction crash occurs, there’s no easy formula for establishing fault.

1. Multiple tailgaters, a series of crashes. Driver A is slowing in heavy traffic and is rear-ended by Driver B. Driver C can’t react in time and smacks into Driver B. Driver D brakes but still hits Driver C, pushing that vehicle into B, which collides again with A. Driver A may have claims against Drivers C and D as well as B for following too close.

2. One speeder, a series of crashes. Drivers A, B, and C are all crawling along in heavy traffic. Driver D, who is busy texting, speeds around a curve and doesn’t see the line of cars until it’s too late to react. Driver D rear-ends Driver C, pushing that vehicle into Driver B, whose car is driven by the impact into Driver A. Given that set of facts, a jury would probably find Driver D at fault for all three crashes.

3. Multiple distractions, a series of crashes. Driver A brakes abruptly while eating in his car, having spilled coffee in his lap. Driver B doesn’t see A braking because she is checking her phone and rear-ends A. Driver C, whose reaction time is impaired by a three-martini lunch, barrels into Driver B. Each driver may share some fault for the wreck— but since Colorado has a comparative negligence law, it may be possible for one or more of the injured parties to recover damages based on the relative level of fault of the other parties involved.

As in the case of two-car collisions, the process of determining fault in a multi-car collision will depend on the findings of the police investigation, the physical evidence and witness statements, and the relevant statutes.

There’s no particular remedy for being caught in the middle of a chain reaction of rear-end collisions caused by another driver who was following too close or not paying attention. But there are steps you can take in an effort to reduce your chances of being on either end of a rear-ender. They include: