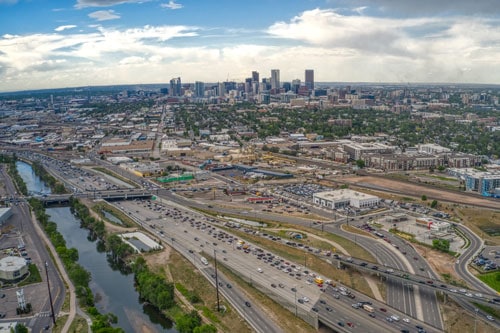 Anyone who’s been stuck on Denver’s busiest roads during peak driving times — meaning just about any time between dawn and dusk, it seems — knows that the metropolitan area has a traffic problem. Statistical studies consistently rank Denver among the 25 worst cities in the country for traffic congestion, usually placing the Mile High City at 19th or 20th on the list.

The pandemic shutdown eased congestion for months. But now that traffic is approaching pre-pandemic levels, it’s high time to take a closer look at the forces driving Denver’s traffic nightmares, and what officials are hoping to do in the future to relieve the problem.

THE HIGH COST OF CONGESTION

The “simple” explanation for Denver’s traffic woes has to do with population growth, leading to soaring traffic volume, exceeding the anticipated capacity of major highways and arterials. Vehicular travel across Colorado increased 31 percent from 2000 to 2019, the ninth highest rate of increase in the country.  The surge in volume has left people stuck in stop-and-go traffic for a rising number of hours each year; according to one recent report, traffic delays cost the average Denver driver $1242 a year in wasted fuel and lost productivity. Another study of congestion patterns predicts that the 36 hours Denver drivers now spend stuck in traffic every year will increase to 56 hours by 2040, as the city’s population is expected to increase by 33 percent over the next two decades.

SPRAWL AND THE RISE OF THE SUPERCOMMUTER

The surge in population is significant, but it’s not the only factor in Denver’s gridlock issues. Many other cities of comparable size to Denver appear to have done a better job of improving infrastructure and promoting mass transit to deal with population growth. One characteristic that Denver shares with other cities in the western U.S. is the way land-use patterns have encouraged sprawl and the rise of what’s known as supercommuters — people whose daily trip to work takes 90 minutes or more each way. According to one study, Denver had a 45 percent increase in supercommuters between 2010 and 2019. Although the pandemic resulted in more people working from home, it’s not clear yet if that trend will continue; in any case, extra-long commutes are considered a major contributor to congestion.

Another element in Denver’s traffic snarls is bad driving, leading to accidents and delays. One study, based on insurance quote evaluations of driver performance that take into account the number of speeding tickets, accidents, DUIs, and so on, ranks Denver as the 13th worst city in the country when it comes to bad drivers — and Colorado is considered the third-worst state overall. (Thank you, Wyoming and Virginia, for keeping us out of first place.) Colorado Springs ranks as the 21st worst city in the same survey.

Traffic planners envision a day when self-guided cars will plot the most efficient routes, optimize speed, travel within six inches of each other without collisions or delays, and take us where we want to go with a minimum of hassle. That day may still be a long way off, but even modest investments in better planning and technology can make a difference. The Colorado Department of Transportation recently announced a pilot program to develop “coordinated ramp metering” along a heavily congested section of I-25, adjusting the lights allowing access to the highway to reflect real-time conditions. A similar program in Melbourne, Australia, greatly improved travel speeds and highway access while reducing crashes by as much as fifty percent.  Combine such innovations with campaigns to encourage better driving, shift less urgent trips to off-peak hours, and make greater use of mass transit, and Denver’s traffic problem could be headed in the right direction — for a change.

For more than thirty years the attorneys at Franklin D. Azar & Associates have helped thousands of injured people obtain complete and timely compensation for their losses. Our proven track record and expertise have allowed us to grow into the largest personal-injury law firm in Colorado, with offices in Denver, Aurora, Thornton, Greenwood Village, Colorado Springs, and Pueblo. If you’ve been injured in a bus, car, truck, or motorcycle accident, you may be entitled to compensation.  Please call the car accident attorneys at FDAzar day or night for a free consultation and no-obligation evaluation of your case.