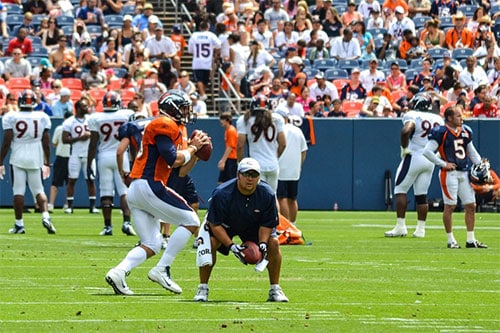 What Is the Most Common Injury in Football?

Like most people who call Colorado home, those of us who work at FDAzar tend to be diehard fans of the Denver Broncos. Even in the middle of a tough season, we identify with the team’s winning traditions, its professionalism and quest for excellence. That’s why we’re proud to support the team.

As personal injury specialists, we also recognize how quickly a serious injury can alter someone’s life, whether that person is a professional athlete or not — and the importance of taking steps to prevent those injuries if possible.

What are the chances of injury in a football game?

The figures vary depending on the level of the sport.

According to data gathered by the Colorado School of Public Health, high school athletes average four injuries per 1000 exposures in all the major sports combined. (One exposure is equivalent to one player in a single game or practice; thus, two squads of 22 playing one game counts as 44 exposures.)

However, the risk of injury among high school football players is three times higher than it is for competitors in other sports; given the number of exposures a player will have over four years, that player is likely to sustain at least one injury in the course of a high-school career.

According to the NCAA, the overall injury rate among college football players is 8.1 injuries per 1000 exposures, and players are seven times more likely to be injured in a game than in practice.

Data for professional football players is a bit trickier; changes in reporting requirements have led to a surge in the number of reported injuries, especially concussions. But it’s clear that the NFL has the highest game injury rate among major sports in the United States: 75.4 injuries per 1000 exposures, far more than professional baseball, basketball, or hockey. The only major sport that comes close to that figure is English rugby (its injury rate is actually slightly higher).

What are the most common football injuries?

The NFL Physicians Society found that the most common injuries in football are “concussions, blunt injuries to the chest such as cardiac contusions, pulmonary contusions, broken ribs, abdominal injuries, splenic lacerations and kidney injuries.” Other studies, though, stress that knee, shoulder, wrist and ankle injuries are also quite common, along with heat and overtraining injuries.

The Most Serious Injuries of All

Concussions and traumatic brain injuries are among the most serious long-term health risks undertaken by football players.

A 2009 report by the NFL indicated that the incidence of memory loss and dementia among retired professional football players was higher than that of the general population. Data is still being collected on the long-term effects of such injuries, and the league is working at reducing the incidence of injury by outlawing helmet-to-helmet contacts and other risky behavior, but the risk remains a real one at all levels of the sport.

Sports medicine experts recommend a number of steps to help reduce the risk of injury in football. They include:

For more than thirty years the attorneys at Franklin D. Azar & Associates have helped thousands of injured people obtain complete and timely compensation for their losses. Our proven track record and expertise have allowed us to grow into the largest personal-injury law firm in Colorado, with offices in Denver, Greenwood Village, Aurora, Colorado Springs, and Pueblo. If you’ve been injured in a bus, car, truck, or motorcycle accident, you may be entitled to compensation.

Please call the car accident attorneys at FDAzar day or night at (855) 637-1268 or contact us here for a free consultation and no-obligation evaluation of your case.