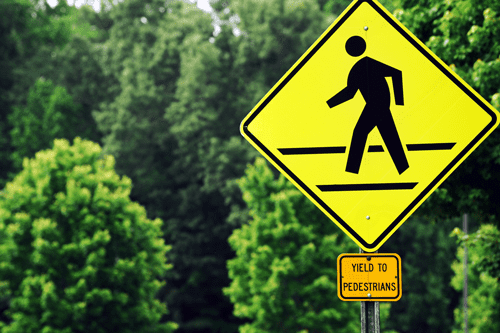 Here’s a fun fact. Did you know that Denver, Colorado, was once one of the most innovative cities in the world when it came to pedestrian safety?

It’s true. In the 1940s visionary traffic engineer Henry Barnes retooled the stop lights in downtown Denver so that auto traffic would come to a halt in all directions, long enough for pedestrians to cross an intersection — diagonally, if they wished. Barnes wasn’t the first to try such a thing (similar systems were tested in Kansas City and Vancouver), but he popularized the concept of an “exclusive pedestrian interval,” also known as a Barnes Dance. When he became traffic commissioner in New York City and introduced the Barnes Dance to foot-weary Manhattanites, he was hailed as a hero — but also criticized for interfering with the city’s relentless flow of cars, buses, and taxis.

Today many cities have embraced the idea of an exclusive pedestrian interval, but others have shied away from it. Denver eliminated the Barnes Dance in 2011, deeming it no longer efficient for coordinating auto, bike, light rail, and foot traffic. And the city’s reputation among pedestrian safety advocates has slipped in recent years. According to a 2017 report, Denver has a much higher per capita rate of fatal pedestrian injuries than many comparable cities, such as Seattle, Minneapolis, and Portland — but still well below that of Austin, Los Angeles, or Albuquerque.

City officials are seeking to address the problem in a number of ways, including sidewalk improvements, better lighting and crosswalks, and traffic “calming” strategies. But there are steps you can take yourself to make your pedestrian journeys a bit safer, beyond just “looking both ways.” Some key pedestrian survival tips:

Use the crosswalks. And caution.  Many auto-pedestrian crashes occur because the person on foot isn’t where the driver expects — for example, stepping out between cars in the middle of a block (also known as jaywalking). Even if you are using the designated crossing and have a signal beckoning you to proceed, don’t assume that driver making a California turn sees you or plans to stop. Wave and make eye contact, if possible, before putting your body in the path of mechanized vehicles.

Make yourself visible. If you’re a pedestrian commuter, maybe you prefer charcoal suits. But dark colors can become unintentional camouflage as twilight turns to evening. Wear something bright, or even a highly reflective jacket, if you’re planning to be out in challenging light conditions.

Share the road. If you’re part of a group, walking single file is the best way to avoid possible friction with cyclists, runners, skaters, and scooters. By the same token, any pets should be kept on a short leash, for their safety and yours.

No sidewalk? Walk facing traffic.  With drivers keeping to the right, you should keep to your left, the better to see what is headed toward you and to make adjustments as needed to keep out of their way. If there’s not enough shoulder for you to proceed comfortably, you really ought to find a different way to go.

Avoid electronic distractions. Talking or texting on a cell phone, listening to music so loud that you can’t hear traffic sounds around you — anything that takes your attention away from your surroundings is going to raise the risk level. Come on, get serious. We’re walking here!

For more than thirty years the attorneys at Franklin D. Azar & Associates have helped thousands of injured people obtain complete and timely compensation for their losses. Our proven track record and expertise have allowed us to grow into the largest personal-injury law firm in Colorado, with offices in Denver, Aurora, Thornton, Greenwood Village, Colorado Springs, and Pueblo. If you’ve been injured in a bus, car, truck, or motorcycle accident, you may be entitled to compensation.  Please call the car accident lawyers at FDAzar day or night at 720-372-2824 or contact us here for a free consultation and no-obligation evaluation of your case.