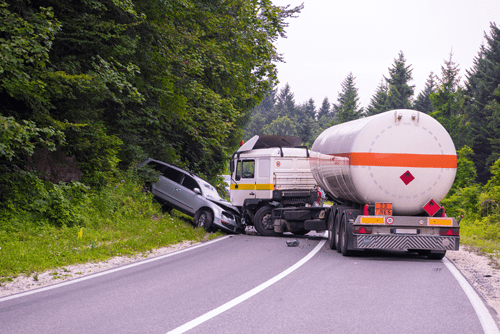 Some of the most serious crashes on the road involve collisions between large commercial trucks and passenger vehicles. In such cases, the occupants of the car are far more likely to face the prospect of major or even fatal injuries. Big rigs are 20-30 times heavier than passenger cars, with much greater ground clearance, which can result in smaller cars getting the brunt of the impact and being dragged under the truck.

According to U.S. Department of Transportation data, 4,316 people died in large truck crashes across the U.S. in 2018. In two-vehicle crashes involving a large truck and a passenger car, more than ninety percent of the fatalities were occupants of the car!

The statistics are alarming, but most truck-car crashes are preventable. No one can alter the behavior or all other drivers on the road, but below we discuss the top causes for such crashes and steps you can take, as a defensive driver, to reduce your chances of being involved in a horrific collision.

For many years, increased regulation and tougher requirements in the trucking industry were credited with playing a significant role in reducing the number and severity of truck accidents. By 2009, the mortality figures were less than half of what they’d been 30 years earlier. But over the past decade, the trend has gone in the opposite direction; the number of fatal crashes involving large trucks or buses jumped 45 percent between 2009 and 2018.

Why? Several factors appear to have played a part in the increase in fatal crashes, including the presence of more trucks on the road, driving millions of more miles each year. Many long-haul truckers are paid by the mile, so there are pressures for them to be out on the road as much as possible. Although federal regulations limit the number of hours they can actually be behind the wheel every week, even those who scrupulously follow the rules can end up putting in many more hours on non-driving tasks, such as waiting to unload their trailer or maintaining the vehicle. The result is long hours, high stress, and the prospect of sleep deprivation.

THE CAUSES BEHIND TRUCK CRASHES

The federal government collects massive data related to the events and details of motor vehicle crashes, but many of the studies deal only indirectly with questions of crash causation and fault. Still, there is enough data compiled to zero in on five factors that appear to be the leading causes of truck accidents resulting in serious injuries:

Speeding. At least one “driver-related factor” shows up in roughly a third of all large-truck fatal crashes, and speeding is the most commonly cited of those factors — as it is for passenger vehicle crashes, too.

Distracted driving. It’s probably no coincidence that more than half of fatal truck crashes occur in rural areas. Drivers who are bored after long hours on largely empty roads may be more likely to become distracted or inattentive than those driving in congested areas.

Impairment. In 2018, 305 of the 4,786 large truck drivers in fatal crashes (six percent) tested positive for at least one drug — but then, sixty percent of them were not even tested. This category also includes “fatigue,” which studies have cited as a prominent factor in one out of every seven truck crashes. As we have written about before, the number of cases involving driver fatigue may be greatly underestimated.

Inadequate training or maintenance. Shortages of veteran drivers have prompted some segments of the trucking industry to utilize more novice drivers, who may or may not be fully trained or conscientious about driving conditions or equipment maintenance requirements.

Improper loading. Trucks that aren’t properly loaded can tip over or spill their contents on the road. It happens more often than you might think.

WHAT YOU CAN DO TO PROTECT YOURSELF

Of course, not every truck-car crash is the result of defective equipment or driver error. The driving habits of those operating passenger cars also play a role. Trucks of all kinds should be approached with care in any traffic situation, whether it’s a delivery van in your neighborhood or an 18-wheeler on the highway. Too often, motorists don’t make allowances for the fundamental differences in the way trucks operate, from braking capability (a loaded tractor-trailer can take up to 40 percent longer than a car to stop) to general maneuverability.

Give truckers a wide berth—and a break. Don’t lurk in the “no-see zone,” the areas beside or behind a truck where the driver has little or no visibility. Don’t change lanes abruptly in front of a truck. Don’t underestimate the speed (or overestimate the braking ability) of an oncoming rig when turning left at an intersection. Share the road, and everybody has a better chance of getting home safely.

If you or a loved one has been injured in an accident involving a tractor-trailer, semi-truck, or other commercial vehicle, Franklin D. Azar & Associates can help. Our track record over thirty years of representing seriously injured people has helped us to grow into the largest personal-injury law firm in Colorado, with offices in Denver, Aurora, Greenwood Village, Thornton, Colorado Springs, and Pueblo. We have experienced truck accident lawyers ready to review your case with you, and we have the dedication to represent your interests and get you the compensation you deserve. Contact us today for a free, no-obligation consultation and evaluation of your case.