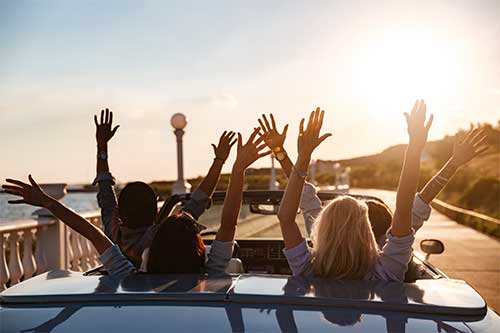 There are plenty of jokes made by nervous parents when there’s a new driver in the household, but the statistics for car accidents involving teens are no joke. According to the Centers for Disease Control and Prevention, motor vehicle crashes are the leading cause of death for teens in the United States, claiming six victims aged 16-19 every day.

Many of those deaths are preventable, and there are solid strategies for educating teen drivers to improve their safety for years to come. But first it’s important to understand the factors involved that make teen driving so hazardous.

HOW BIG IS THE TEEN ACCIDENT PROBLEM?

Drivers under the age of 20 make up only 7 percent of the U.S. population. But they tend to be disproportionately involved in accidents, accounting for 11 percent of the total cost of motor vehicle injuries. In 2015, 2,333 teens between the ages of 16 and 19 were killed on the roads, while more than 235,000 were treated for injuries suffered in car crashes. The Insurance Institute for Highway Safety has calculated that, per mile driven, drivers 16-19 are almost three times more likely than older drivers to be involved in a fatal crash.

Those figures get even more alarming if the driver is younger and male. The death rate for adolescent male teenage drivers and passengers is double that of adolescent females, and the crash risk is twice as high for 16- and 17-year-old drivers as it is for 18- and 19-year-old drivers.

The CDC focuses on eight “danger zones” for young drivers. Many of them are problems for adult drivers, too, but the risk is even greater for teens. They include:

1. Inexperience. Studies indicate that teen drivers are less likely to recognize dangerous situations and respond in a timely manner than older, more experienced motorists. A young driver’s reflexes may be superb, but he or she may lack the critical decision-making skills required to avoid serious crashes.

2. Risky behavior. Teens are more likely to speed than older drivers, change lanes recklessly, and to misjudge the stopping distance required between vehicles. The desire to show off to peers, particularly male passengers, is another part of the problem.

3. Night driving. Just about half of all teen fatalities from car crashes occur between 3 p.m. and midnight. More than half occur on weekends, according to 2015 data. Low visibility, and the possibility of increasing intoxication, distraction and fatigue as the hour gets later, makes late-night driving a prime arena for accidents.

4. No seat belts. A 2015 survey indicates that only 61% of high school students report always wearing their seat belts when riding with someone else. Teens have one of the lowest rates of seat belt use among any group of motorists.

5. Alcohol/impaired driving. Perhaps the most sobering statistics of all: Of male drivers between the ages of 15 and 20 who were involved in fatal crashes in 2015, one in three were speeding at the time of the crash; one in four had been drinking. And the impaired judgment that comes with substance abuse ups the risk factor all around: More than half of the teen drivers killed after drinking and driving weren’t wearing a seat belt.

6. Distracted driving. The distractions range from fiddling with the music selections to texting to eating and engaging in spirited conversations and arguments with passengers. As we’ve noted before, drivers 15-19 have the greatest proportion of drivers involved in distraction-related fatal crashes.

7. Fatigue. Young, sleep-deprived drivers have been blamed for more than half of all fatigue-related crashes.

8. Driving with teen passengers. Not surprisingly, the risk of a teen driver getting into a crash increases significantly with the addition of teen passengers. More distractions, more encouragement to reckless driving, a heightened possibility of alcohol and drug use.

The good news is that while teen crashes remain a serious problem, the fatality rate is actually down significantly since the 1970s. That’s due in part to more prevalent seat belt use and tough state laws, including those that allow police to ticket drivers for not wearing a seat belt. Crackdowns on drunk driving and graduated driver license programs, which limits teens’ exposure to high-risk situations while helping them develop their skills, have also helped raise awareness of the problems and make the roads safer for us all.

Over the past thirty years the attorneys at Franklin D. Azar & Associates have helped thousands of injured people obtain complete and timely compensation for their losses. Our proven track record and expertise have allowed us to grow into the largest personal-injury law firm in Colorado, with offices in Denver, Greenwood Village, Colorado Springs, Pueblo, and Trinidad. We are proud of our approach; we commit attorneys to cases, not paralegals. No one enjoys being in a car accident, but those who have experienced the firm’s level of service frequently turn to us again if needed, and recommend us to their friends and family. Forty percent of our clients have retained us before or are referrals from existing clients.

If you’ve been injured in a car, truck, or motorcycle accident, you may be entitled to compensation. Please call the attorneys at FDAzar day or night at (800) 716-9032 or contact us here for a free consultation and no-obligation evaluation of your case.