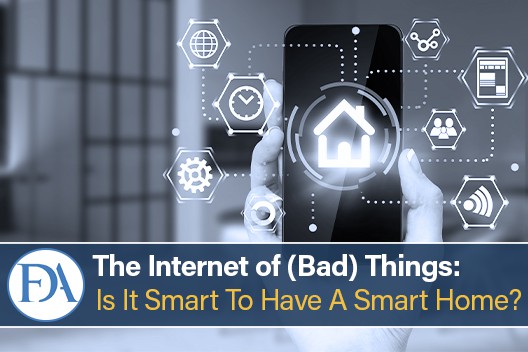 The Internet of Bad Things: Is It Smart to Have a Smart Home?

Almost sixty years ago, the children’s cartoon show The Jetsons envisioned a space-age future full of technological marvels: flying cars, a robot maid, talking appliances, push-button meals and other twenty-first century conveniences would make the world a much more exciting and comfortable place.

We’re still waiting for the flying cars, but many of the other gadgets seen in the show seem rather tame now. After all, we can control our home lighting and heating systems remotely, summon entertainment (or a pizza to go with it) with a voice command, monitor our children from across the house and see who’s at our front door without going near it.  Most of these wonders are part of the so-called “Internet of things,” the emerging use of computer technology in household devices so that they can send and receive data and be controlled online.

But taking your home online also carries certain risks. Devices connected to the Internet may be “smarter” than their analogue counterparts, but they’re also potential targets for hackers. The added convenience you’re seeking might come at a stiff price, including data breaches, invasions of your privacy, and the uneasy feeling that the gizmos you’re using to make your place more secure may be letting strangers in.

To get an idea of what sort of hazards we’re talking about, consider the case of a two-year-old girl who didn’t care for the Nest Cam that her mother used as a baby monitor in their home in Novato, California. She’d point at the green light above her bed and declare that there was a monster in her room.

She wasn’t wrong. One day her mother heard pornographic sounds coming over the intercom feature of the Nest Cam; hackers had breached the system. As a Washington Post story about the incident and Nest Cam vulnerabilities pointed out, “anyone in the world with an Internet connection and rudimentary skills has the ability to virtually break into homes through devices designed to keep physical intruders out.”

Other hackers have taken over Nest cameras and thermostats for purposes ranging from juvenile pranks to racial harassment. The manufacturers of “smart” security devices like Nest Cam are torn between making the devices easy to use and adding additional layers of protection against malicious attacks, such as requiring multi–factor authentication from users.

One of the most popular innovations of recent years has been the arrival of “smart” speakers, coupled with voice-controlled, digital assistant software, such as Amazon’s Alexa, Google Assistant or Siri from Apple. While these devices make it easier to, say, bake a pie while cueing up your favorite pie song, or look up an obscure reference in The Sopranos without interrupting the show, they’ve also been at the center of privacy debates. Last year all three companies announced that they were suspending the use of “human reviewers” who listened to anonymous clips sampled from actual users’ homes, a form of eavesdropping. But that firestorm was soon followed by even more disturbing revelations about the degree to which your personal interactions with the devices are recorded and archived. Your personal info is just waiting to be plucked and exploited.

One group of researchers announced that they had developed eight different voice apps that could use Google and Amazon devices to listen in on private conversations. They could also use those apps to trick users into giving up their passwords, allowing an unscrupulous operator to tap into numerous other accounts.

Google, Amazon and Apple report they have made improvements in their software security since the privacy issues were raised. However, the possibility of a data breach through one of the smart devices in your home remains a genuine possibility. If you must be part of the vanguard of the Internet of Things, one of the best steps you can take to aid your own cybersecurity — and peace of mind — is to change passwords frequently and not use the same password on more than one device. Multi-factor authentication systems can help, too. (Our handy list of other tips for protecting your data and your privacy is just a click away.)

Franklin D. Azar & Associates is one of the largest plaintiff law firms in Colorado, known for championing the rights of individuals who have suffered damages at the hands of large corporations.  Over the past 30 years, our attorneys have secured more than $1.5 billion in compensation for our clients, including more than $750 million from Walmart in a wage and hour dispute that involved hundreds of thousands of class action participants and litigation in 26 states.

If you have suffered damages as a result of unfair business practices, data breaches, or corporate misconduct, the class action attorneys at FD Azar may be able to help. Speak with a member of our class-action team today or contact us here. The consultation is free.