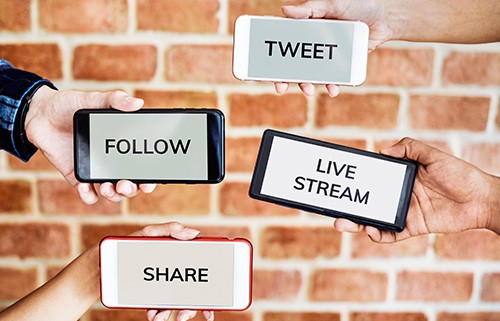 From Facebook to Instagram to TikTok and beyond, the popularity of social media platforms has transformed millions of us into the stars of our own reality shows. We can instantly update our followers on our daily activities, comment on current events, document exotic adventures and mundane meals, and share the antics of children and pets with friends scattered across the globe.

But while we’re busy posting and tweeting, it’s easy to forget that the intimate details we’re disclosing may be more public than we think.  Even politicians and Hollywood celebrities have learned that oversharing can be a problem, and that TMI — Too Much Information — can come back to haunt you.

Exercising discretion in your use of social media is usually a good idea, but it’s particularly important after a car accident, when you could find yourself in the position of seeking compensation for injuries or property damage.

The legal process is a contentious one, and it’s not uncommon for insurance companies to attempt to use statements you may have made, including social media posts, to try to challenge your claims and pay you less than they should.

Some Major Don’ts about Social Media and Car Accidents

Right after an accident, it’s important to exchange basic information with the other driver, obtain contact information for witnesses, and file an accident report.  But it’s generally a good idea NOT to make assertions about who you think was at fault, the degree to which you’ve been injured (which you may not even know yet), or other matters that might later come up in court.

You should practice the same kind of restraint in anything you put on social media about the accident. Regardless of your privacy settings, regardless of how badly you want to proclaim your innocence and express your frustration about somebody’s else’s carelessness, avoid these common mistakes:

There are good reasons for this.

Like you’ve heard on television, anything you say can be used against you; it can be taken out of context, misconstrued and distorted to try to persuade a jury that the accident really didn’t have much of an impact on you or that you admitted fault.

If you declare early on that you’re “fine,” an insurance company representative might argue that you weren’t really injured at all — even though some injuries, such as concussions or whiplash, may not be apparent in the immediate aftermath of an accident.

Posting about Car Accident on Facebook: A Good or Bad Idea?

Facebook can be a great way of sharing personal news — family reunions, birth announcements, upcoming social events, and so on. But it’s also a place to vent. For the reasons outlined above, you want to avoid the venting.

It’s perfectly understandable that you want to let friends and family know you’ve been in an accident and are in the process of recovering. It might even be a public service to remind your loved ones to be careful on the roads, particularly in bad weather.

But avoid providing a detailed narrative of the accident or explaining how you’re going to proceed in any insurance claim.

Can My Tweets Be Used In Evidence?

The raging debate unfolding among legal scholars about whether Twitter is a public forum is a long way from being resolved.

But savvy users, including many politicians and journalists, tend to regard all their social media accounts as quasi-public in nature; if you assume that, you’re less likely to post something that you will later come to regret.

Statements made on Twitter and other social media platforms have surfaced in all kinds of civil litigation, including accident cases, so don’t ever fall into the fallacy of thinking that nobody is paying attention to what you snap, write, and tweet.

How can social media posts be used against my injury case?

Statements about how the accident happened, particularly if they vary in any way from what’s in the accident report or what other witnesses recall, can be used to confuse the issues in your case. But it doesn’t have to be something directly connected to the accident.

For example, photos of you exercising or taking a vacation, or boasts about your recuperative powers, could be used to contend that you weren’t truly injured.

Consider anything you post as subject to subpoena and scrutiny, and if possible stay away from social media after an accident until the case is unresolved, in order to avoid TMI.

If you or a loved one has suffered injuries or financial loss as a result of a hit-and-run accident, you may be entitled to compensation. Over the past 30 years, Franklin D. Azar & Associates has represented victims in some of the most complicated and serious personal injury and wrongful death cases arising from traffic accidents.

Our proven track record and expertise have allowed us to grow into the largest personal-injury law firm in Colorado, with offices in Denver, Greenwood Village, Colorado Springs, and Pueblo. If you’ve been injured in a bus, car, truck, or motorcycle accident, you may be entitled to compensation. Call us at 1-303-Hurtline or contact us here for a free consultation and no-obligation evaluation of your case.