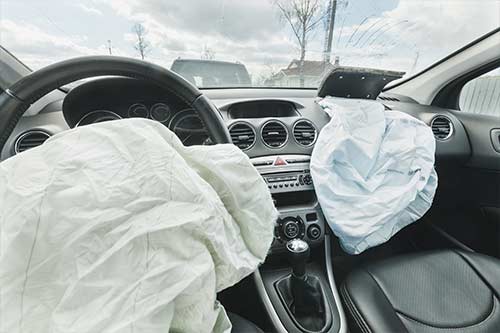 It’s been twelve years since car manufacturers launched what would become the biggest recall of a defective product in U.S. automotive history. Yet millions of unstable Takata air bag inflators may still be in use, posing a potentially lethal threat to drivers who have either disregarded urgent recall notices or are unaware of the ticking time bomb inside their vehicle.

The latest death blamed on an exploding Takata inflator happened August 20, 2020, in Mesa, Arizona. The victim, the driver of a 2002 Honda Civic, suffered fatal injuries after the driver’s side air bag inflator ruptured in a crash. It’s the 17th death in the U.S. and 26th worldwide to be attributed to the inflators, which have also injured several hundred drivers.

The Takata recall involves more than 70 million airbags in 42 million vehicles, including millions of cars manufactured by Honda, Toyota, Audi, BMW, Ford, General Motors, Nissan, Mazda, Subaru, Fiat Chrysler, General Motors, and other major car companies. The recall began on a limited basis in 2008 and has expanded to encompass many models sold between 2002 and 2013.

The defect in the air bags has to do with the chemical propellant used to help the bags inflate upon the impact of a crash. In a cost-saving move, Takata used an ammonium nitrate compound that proved to be unstable; the degrading of the propellant over time can cause the inflator cartridge to explode during an air bag deployment, sending shrapnel flying in the direction of front-seat occupants.

According to a federal indictment, several high-level Takata executives manipulated and suppressed testing data in order to represent to auto makers that the rupture-prone inflators met safety standards. In 2017 Takata agreed to plead guilty to wire fraud and pay $1 billion to settle a criminal case brought by the U.S. Department of Justice. The company later filed for bankruptcy.

Recalling and replacing millions of inflators has proven to be an unprecedented challenge. Government regulators estimate that, despite recall efforts, nearly a third of the affected cars in the U.S. have not been repaired. In a statement, Honda noted that the vehicle involved in the latest fatality had been identified for recall in 2011; the company said that it sent 15 notices by mail to the owners over the past eight years and that representatives also attempted to contact the current owner of the 2002 Civic by phone and in person. Honda recently paid $85 million to settle claims by 48 states that it was insufficiently diligent in alerting customers to the inflator defect.

The Takata scandal has shaken consumer confidence in air bag safety and raised questions about the vigilance of government agencies that regulate the auto industry. But it’s also a wake-up call to check with your dealer regarding any outstanding recall or safety issues with your vehicle. The National Highway Traffic Safety Administration has a special lookup tool on its website, SaferCar.gov, to help consumers determine if their vehicle is included in the Takata recall, as well as to search by VIN for other recall issues.