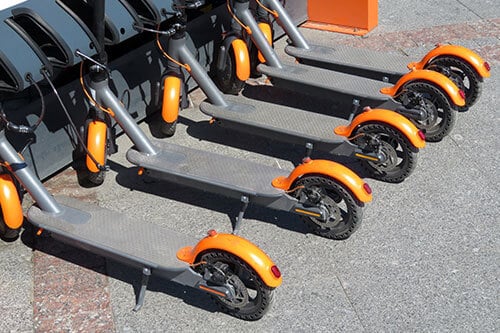 In just a few months, the dockless electric scooter has evolved from an oddity to a common sight in many major American cities. And as the numbers have increased, so has the level of annoyance among pedestrians and motorists, many of whom regard the whizzing, toy-like conveyances as too flimsy for the roads and yet too fast for the sidewalks.

But others have embraced the phenomenon, seeing in the easy-rent, drop-anywhere vehicles a welcome solution to urban traffic, a way to negotiate congested areas quickly, at a fraction of the cost-per-mile of a gas-guzzling car. Some even regard such “smart mobility” options as an essential part of urban planning, helping commuters get to and from public transit stations and rely less on their cars — despite growing controversy over scooter accidents and liability issues.

One thing is certain. The scooters aren’t going away any time soon. A host of companies are rolling out thousands of scooters in dozens of markets; according to the Denver Post, Denver alone could soon have as many as 1750 scooters, provided by five different companies. Before hopping on board, though, you should find out a bit about the possible risks involved — both on the street and in the legal arena.

The sudden influx of scooters, developed by companies such as Lime, Bird, and Lyft, have taken many public officials by surprise. Rules governing their use vary from one place to another. California requires that scooter riders wear a helmet (although that rule isn’t always enforced); Colorado does not. Some municipalities are trying to keep them in bike lanes, others are trying to keep them off the road altogether.

Typically, the companies allow you to unlock one of their scooters with an app you’ve downloaded; they then charge by the minute until you choose to end the ride, leaving the equipment on public property somewhere. That approach has incensed some city planners, who don’t like the abandoned e-vehicles cluttering up public sidewalks, and it’s also led to complaints from people tripping over carelessly placed scooters.

The greater liability issue, though, has to do with the actual operation of the scooter. In Colorado, the scooters, while motorized, aren’t permitted on actual roads; consequently, the riders aren’t required to have liability insurance. And if you read the fine print of the rental agreement from companies such as Bird, you’ll discover that the rider “assumes all responsibilities and risks for any injuries” that might result from using one of their scooters. Injure yourself or a pedestrian while scooting — or worse, end up in a collision with a much faster, much heavier automobile? The scooter company is going to tell you that’s your problem, not theirs.

Calls to several credit card companies confirmed that, while many credit cards offer some form of accident coverage when you rent a car or motorcycle, that coverage doesn’t apply to scooter rentals. In general, your personal auto insurance policy probably doesn’t help you here, either — with one notable exception. We’ve written before about the importance of having uninsured motorist coverage, which is required in Colorado unless you formally reject it in writing.

The potential for scooter accidents is another example of why such coverage is crucial. If you’re operating an electric scooter and happen to have an encounter with a reckless auto driver, and that driver has failed to obtain insurance, in most instances your own uninsured motorist coverage will provide some protection, just as it would if you were a motorist or a pedestrian.

No question, scooters can be a fast, exciting way to get around. But as the number of scooters increases, so does the number of accidents involving them. It’s a good idea to check on what your insurance policy does and doesn’t cover, get a helmet and get comfortable with how the vehicles operate before taking one on an urban mission.

THE PERSONAL INJURY ATTORNEYS AT FDAZAR

Over the past thirty years the attorneys at Franklin D. Azar & Associates have helped thousands of injured people obtain complete and timely compensation for their losses. Our proven track record and expertise have allowed us to grow into the largest personal-injury law firm in Colorado, with offices in Denver, Colorado Springs, Pueblo, and Trinidad. If you’ve been injured in a car, truck, or motorcycle accident, you may be entitled to compensation. Please call the attorneys at FDAzar day or night at 800-716-9032 or contact us here for a free consultation and no-obligation evaluation of your case.