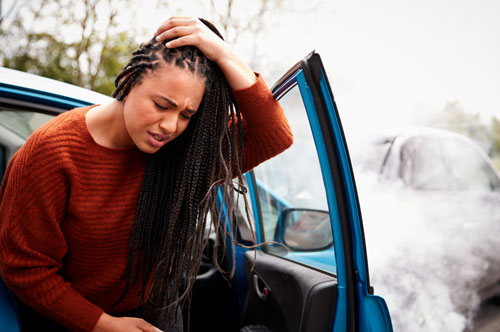 Dealing With Concussion And Head Injury After A Car Crash

The recent death of comedian and TV star Bob Saget after apparently hitting his head in a hotel room has focused renewed attention on the problem of concussions and other forms of traumatic brain injuries, prompting calls from health officials to take even seemingly minor bumps on the head seriously. In Saget’s case, what might have appeared to be a simple mishap actually caused severe skull fractures, likely leading to confusion and loss of consciousness.

A blow to the head can be one of the most life-altering consequences of a car crash. Yet many victims don’t realize they have suffered a serious injury and fail to seek proper medical help in the critical first hours after the event. Here’s a rundown of signs and symptoms that every driver should know about.

WHAT ARE THE SYMPTOMS OF A CONCUSSION?

According to the Centers for Disease Control and Prevention, a concussion is a type of traumatic brain injury—or TBI—caused by a bump or blow to the head, or by a hit to the body that causes the head and brain to move rapidly back and forth. This sudden movement can cause the brain to bounce around in the skull, creating chemical changes in the brain and sometimes stretching and damaging brain cells.

Some signs to an observer that a person has suffered a concussion or some other form of TBI include:

OTHER TYPES OF TRAUMATIC BRAIN INJURY

Concussions are considered a mild form of TBI. If properly monitored and treated, most cases are not life-threatening. Some may heal in a few days or weeks. But the devastating effects of moderate to severe forms of TBI can linger for months or years; depending on the extent of the damage to brain cells or bleeding within the skull, they can lead to permanent loss of certain brain functions, personality changes, ongoing challenges in learning, movement, and cognitive processing, and death. In 2019, there were approximately 61,000 TBI-related deaths in the United States, an average of 166 deaths a day.

Because the severity of a head injury may not be manifested immediately after a crash, all such injuries should be treated seriously. Seek medical help right away, and don’t leave anyone who suffered a blow to the head (or even a “slight bump”) unmonitored. Most people with a mild TBI or concussion can recover safely at home following medical evaluation; others may need ongoing care to help with their recovery. In either situation, the emergency response is the same: seek medical help right away.

For more than thirty years the attorneys at Franklin D. Azar & Associates have helped thousands of injured people obtain complete and timely compensation for their losses. Our proven track record and expertise have allowed us to grow into the largest personal-injury law firm in Colorado, with offices in Denver, Aurora, Greenwood Village, Thornton, Colorado Springs, and Pueblo. If you’ve been injured in a bus, car, truck, or motorcycle accident, you may be entitled to compensation.  Please call the car accident attorneys at FDAzar day or night at 800-716-9032 or contact us here for a free consultation and no-obligation evaluation of your case.