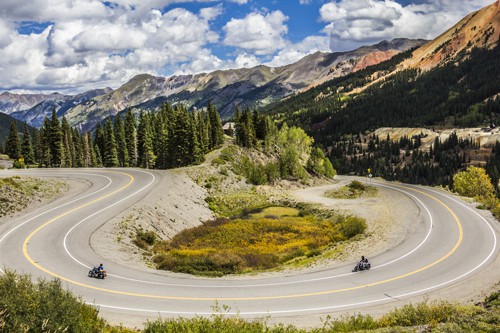 Colorado’s Most Dangerous Roads for Motorcycles

2020: COLORADO’S MOST DEADLY YEAR FOR MOTORCYCLES

The Colorado Department of Transportation recently revealed that 2020 was Colorado’s deadliest year for motorcyclists. For Motorcycle Awareness Month, the CDOT has launched a new campaign focused on increasing motorcycle safety. Although the pandemic saw generally reduced traffic, 137 motorcyclists died on Colorado roadways in 2020. This ranks as the worst year on record for deadly crashes.

The new campaign by the Colorado Department of Transportation emphasizes wearing a helmet for optimal motorcycle safety. But helmets are just one example of preventative, protective action. Today, we’re taking a look at some of the most dangerous roads in Colorado. Extreme altitudes and densely populated peaks make for some unique conditions on Colorado roads. If you drive a motorcycle, be mindful of these stretches, or avoid them altogether.

Injured in a Crash? Call Today

Motorcyclists in Colorado represent just 3% of all vehicles, yet they make up 23% of deaths on Colorado roadways. According to the Colorado Department of Transportation:

In 2019, CDOT partnered with Grease Monkey, an automotive maintenance franchiser, to raise awareness about motorcycle safety. They encouraged all motorists to keep an eye out for motorcycles. Safety suggestions include:

You can read more about Colorado Safety Initiatives here.

Not all dangerous roads are high in the mountains. The State Highway 470 portion of the Beltway is prime car crash territory. Just 27 miles long, this section of road features very steep terrain in some spots, making it uniquely hazardous.

Frequent car accidents on SH 470 are usually attributed to heavy traffic and several particularly scary interchanges. Though it doesn’t appear harrowing, the sheer frequency of accidents makes this one of the most dangerous roads for motorcycles in Colorado.

Talk to a Lawyer Now

North-South Interstate 25 bisects the state of Colorado. Starting in Fort Collins, it passes through Denver and then Santa Fe. The Front Range Corridor includes more than 80% of the state’s population. On this section of road, there is no peak traffic time—congestion comes with the territory.

But congestion isn’t the only factor in the high number of crashes on the Front Range Corridor. The 75-MPH speed limit coupled with the heavy traffic seems to be a recipe for disaster. According to the Colorado State Patrol, excessive speed and driver behavior are the leading causes of crashes along this road.

THE MILLION DOLLAR HIGHWAY: COLORADO’S MOST DANGEROUS ROADS FOR MOTORCYCLES

The highway with a funny nickname has a bad reputation. Stretching across Western Colorado, US 550 was originally a toll road. The Million Dollar moniker applies to a specific portion of the road that passes from Ouray to Silverton. 25-miles long, this stretch passes over three mountains with elevations over 10,000 feet.

Anyone who has driven The Million Dollar Highway has seen its perilous points up-close-and-personal. It’s a section of road filled with frightening drop-offs, dangerous switchbacks, and hairpin corners. If that weren’t bad enough, guardrails are non-existent to make way for snow plow passage. This road also sees heavy semi-truck and RV traffic, making it a perfect storm of hazardous conditions.

Talk To A Motorcycle Accident Attorney

Unfortunately, not all accidents can be avoided. Even with the best safety precautions and practices in place, motorcycle crashes happen. If you were injured in an accident through no fault of your own, a motorcycle accident attorney can help.

With suitable representation, you have a better chance of getting the compensation you deserve. Franklin D. Azar, a motorcycle accident law firm in Colorado knows the unique devastation of motorcycle injuries. We understand that motorcyclists are more prone to serious injury because of their direct exposure to vehicles, debris, and the road itself.

An experienced motorcycle accident lawyer can give you the legal assistance and representation you need. Call Franklin D. Azar & Associates right away to speak with a Colorado motorcycle accident attorney. We’ll fight for you and get you back on the road.

Get Your Free Consultation

WHAT ARE THE CHANCES OF GETTING IN A MOTORCYCLE ACCIDENT?

The chances of getting in a motorcycle accident are roughly one in one hundred. According to the statistics, approximately one percent of motorcyclists are involved in an accident at some point.

Motorcycle injury lawyer near me?

If you’re looking for a motorcycle injury lawyer in Colorado, we can help. You might be entitled to compensation for your medical bills and pain and suffering. Contact us today for a free consultation.

What kinds of cases do motorcycle accident lawyers handle?

What is a personal injury lawsuit?

When one person suffers from an accident or injury caused by another person’s negligence, they might file a personal injury lawsuit. This type of legal dispute might arise after an auto collision, workplace injury, motorcycle crash, or medical malpractice. A personal injury attorney collects evidence, examines details to determine liability, and builds a case to fight for fair compensation