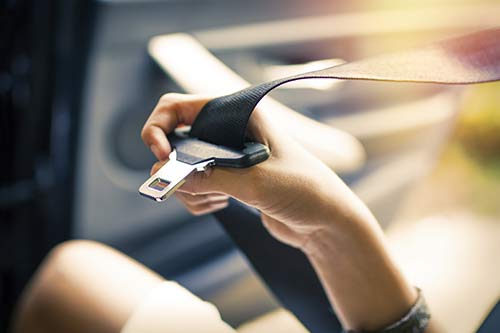 Buckle Up! Facts and Myths About Seat Belts

It’s the most low-tech, taken-for-granted piece of safety equipment in your car. But buckling your seat belt remains the single smartest, life-saving decision you can make every time you get on the road.

For most of us, seat belt use is more or less automatic, a no-brainer. (It’s also required by law in every state except New Hampshire.) According to the National Highway Traffic Safety Administration, more than 90 percent of U.S. motorists routinely buckle up, and seat belt use in passenger vehicles saved an estimated 14,955 lives in 2017. But an even greater number, nearly half of the 37,133 people who died in fatal crashes that year, were people who were not wearing their seat belts. Not all of them might have been saved by seat belts, of course, but thousands could have been.

Decades of data indicate that buckling up is your best protection in any kind of crash, whether it’s caused by an aggressive or impaired driver, bad weather, faulty equipment, or whatever. Buckling up in the front seat of a passenger car reduces your risk of fatal injury by 45 percent; in a light truck, the risk of fatal injury is cut by 60 percent. Seat belts help to keep you secure inside your vehicle, reducing head injuries and the deadly prospect of being thrown from your car in a crash. So why do we still have thousands of preventable deaths each year, stemming from a refusal to wear a seat belt?

The answer may well have something to do with myths about seat belts that have persisted despite being thoroughly refuted. Lap belts in some auto models date back to the 1930s — as does the skepticism of some motorists, who thought the belts might cause internal injuries, be unreliable in a crash, or be difficult to escape from in the event of a fire or being submerged in a river or lake. But by 1968, the year seat belts became required equipment in American cars, many of these objections had been addressed.

For example, take the claim that seat belts might make it hard to escape in certain situations. Incidents involving fire or water make up less than half of one percent of all crashes; and even if you did happen to be facing such a rare event, you have a better chance of surviving if you’re conscious. Wearing a seat belt greatly increases your chance of being conscious and in a position to extricate yourself.

Over the years, new myths have emerged, such as the notion that you don’t need to bother with seat belts because every car is now equipped with air bags. But air bags are designed to work with seat belts, not replace them; the air bag could actually injure you if you’re not restrained by the belt when the collision occurs. There’s also a certain segment of younger male drivers who have historically scorned seat belts as simply bothersome or “unmanly” — but there’s evidence that attitude can get you killed. Among male passenger vehicle occupants between the ages of 18 and 34 who were killed in fatal crashes in 2017, a hefty 60 percent were not using their seat belts.

The bottom line? Seat belts have been with us for so long because they work. Buckle up for life.

For more than thirty years the attorneys at Franklin D. Azar & Associates have helped thousands of injured people obtain complete and timely compensation for their losses. Our proven track record and expertise have allowed us to grow into the largest personal-injury law firm in Colorado, with offices in Denver, Aurora, Greenwood Village, Colorado Springs, and Pueblo. If you’ve been injured in a bus, car, truck, or motorcycle accident, you may be entitled to compensation.  Please call the car accident attorneys at FDAzar day or night at 800-716-8032 or contact us here for a free consultation and no-obligation evaluation of your case.