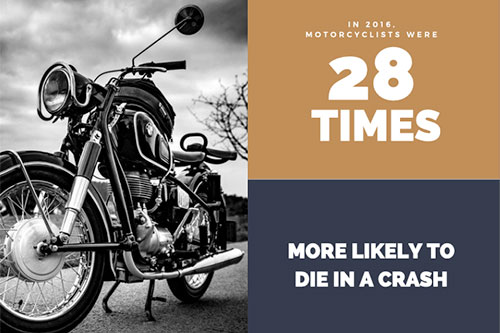 10 Most Common Causes of Motorcycle Accidents

Motorcycles give riders the means they need to get from one place to another quickly. They are easy to park, easy to store, and fun to ride.

Similar to pedestrians and bicyclists, motorcycle riders are more vulnerable to injuries in an accident than other vehicle drivers, as there is nothing stands between a motorcyclist and the chassis of another automobile.

No matter how much care you take in riding, you are still at risk of colliding with a larger vehicle. This fact is borne out by statistics. According to the National Highway Traffic Safety Administration, there were 5,286 motorcycle fatalities in 2016, up 5.1 percent from the previous year.

In 2016, motorcyclists were 28 times more likely to die in a crash than those in a closed vehicle. Motorcycle accidents overall are at their highest level since 2008.

In Colorado, motorcycle deaths have steadily increased since 2011. It peaked in 2016 with 125 motorcyclist fatalities from crashes involving 2,386 motorcycles, according to the CDOT report.

Read below for information regarding the causes and injuries related to motorcycle accidents.

Many in-depth accident related studies have been carried out to determine the common causes of motorcycle collisions, including the Motorcycle Crash Causation Study by the Federal Highway Administration (FHWA), the fatal motor vehicle crashes and fatalities based on data from the Fatality Analysis Reporting System (FARS), and Crash and Injury Statistics based on data from the National Automotive Sampling System (NASS) General Estimates System (GES).

Overall, these motorcycle safety studies conclude that motorcycle accidents have different characteristics to collisions involving other types of vehicles. In particular, the most common causes of accidents involving motorcyclists include the following:

Speeding is a leading cause of all types of accidents, and particularly dangerous for motorcyclists. According to NHTSA, in 2016, 33 percent of all motorcycle riders involved in fatal crashes were speeding, compared to 19 percent for passenger car drivers, 15 percent for light-truck drivers, and 7 percent for large truck drivers.

High-speed performance, flexibility, and low cost are three of the most significant advantages of riding a motorcycle. Many people buy sports motorcycles for their lightweight and fast acceleration features. However, the fatality rate among the sports bike riders is two to four times that of conventional motorcyclists.

2. Driving Under the Influence

Driving under the influence remains a common cause of road accidents. Motorcyclists involved in fatal crashes in 2016 had higher percentages of alcohol impairment than any other type of motor vehicle driver.

According to NHTSA’s National Center for Statistics and Analysis, 25% of the 2016 motorcycle crash deaths were alcohol-impaired (BAC of .08 g/dL or higher).

Given the enormous mental acuity and physical ability required to ride a motorcycle safely, a rider should not even think about getting on a bike after drinking. Indeed, anyone found driving under the influence of alcohol or drugs faces both civil and criminal and civil liability.

In most states including Colorado, lane splitting, that is riding between two lanes, is illegal. Even if you are allowed to do it you should not. While a motorcycle is small and flexible enough for riders to get through traffic jams by riding between two lanes, one wrong move by a car may put a motorcyclist in jeopardy. Many motorcycle accidents were caused by lane splitting due to the following factors:

According to CDOT, careless driving is a leading cause of motorcycle accidents in 2016 and 2017 – more than 35% of accidents were caused by this behavior. When a motorcycle accident is caused by negligence, it could indicate many different ways of careless driving or driving caused by inexperienced drivers, such as not paying attention, speeding without noticing, texting while driving, or other common mistakes.

Some drivers are less experienced than others. A surprising fact from the NHTSA analysis reported that 27% of motorcycle riders involved in fatal crashes in 2016 did not have a valid license. There is no way for any riders/drivers to make such distinctions, so the safest way is to assume that every car we come into close contact with is operated by an inexperienced driver.

Automobile drivers often make errors in judgment when turning left. They sometimes falsely believe they have right-of-way or mistake the distance of an oncoming vehicle from them. The small size of motorcycles makes it less visible to the left-turning vehicles, and therefore such errors can lead to the injury and death of hundreds of motorcycle riders every year.

The lane changing habits of passenger car drivers put motorcyclists in danger all the time. Many automobile drivers myopically check their blind spot, turn on their signal light, and turn. The problem with this habit is that motorcycles are small in size and move fast. By the time the car drivers have moved their eyes from the blind spot to switch on their signal, a motorcycle may have come into it. If the driver does not recheck their blind spot before the turn, it may cause a collision.

Following too close or tailgating is a major cause of accidents for any types of vehicles. While a rear-end car accident often leads to little damage as a fender-bender, a rear-end accident involving motorcycle can cause serious injuries if the collision ejects the rider from the bike.

There is no set safe distance as it varies according to the speed. However, following the principle of physics of momentum, it is best to leave at least three-second traveling distance (under good conditions) behind other vehicles.

Motorcyclists are more vulnerable to poor road conditions than other vehicle drivers. Cracked pavement, open potholes, and random debris can throw a rider off balance and cause a crash. In addition, a suddenly appeared deer or other animals on the street could cause a dangerous accident for motorcyclists for a similar reason due to a sudden maneuver.

This is another accident that is easy to avoid, but nevertheless occurs from time to time. If a driver opens the door of their parked vehicle in the path of an oncoming motorcycle, an accident may occur.

The failure of a system or part on your motorcycle can also cause an accident. The manufacturer of a poorly designed or manufactured motorcycle part can be held legally responsible for injuries that result from a defective part.

For more than thirty years the motorcycle accident lawyers at Franklin D. Azar & Associates have helped thousands of injured people obtain complete and timely compensation for their losses. Our proven track record and expertise have allowed us to grow into the largest personal-injury law firm in Colorado, with offices in Denver, Colorado Springs, Pueblo, and Trinidad. If you’ve been injured in a car, truck, or motorcycle accident, you may be entitled to compensation. Please call the car accident attorneys at FDAzar day or night at 720-372-2824 or contact us here for a free consultation and no-obligation evaluation of your case.