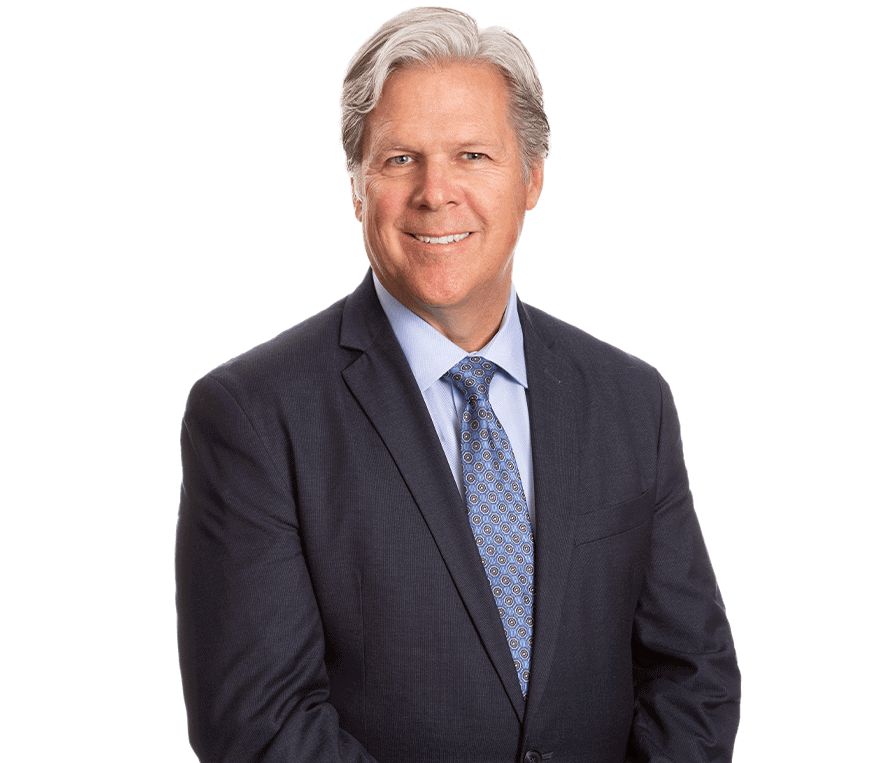 “I’ve practiced law for over 35 years and I still love what I do. I receive a huge amount of personal satisfaction from representing people who have been injured through no fault of their own and helping to make their lives better.”

Bill Marlin was born in Big Spring, Texas. He joined Franklin D. Azar & Associates, P.C. in September 2015. The son of an Air Force fighter pilot, like most military brats, Mr. Marlin moved frequently during his childhood, and has lived in many parts of the country. When his father retired from military service, the family settled in a small town in Illinois. Mr. Marlin received his B.A. degree from the University of Illinois in 1983. From his prior travels as a child, Bill knew he wanted to settle in Colorado, and he obtained his law degree from the University of Denver in 1986.

Mr. Marlin tried his very first case while he was in his final year of law school, interning for the University of Denver’s Student Law Office. It was a small case involving a dispute over a wedding dress between a seamstress and her customer. Mr. Marlin won the case on behalf of his client, and although the verdict amount was relatively small, his client felt that justice had been served. The experience convinced Bill that he wanted to pursue his legal career as a trial lawyer.

Upon graduation from law school, Mr. Marlin joined a personal injury law firm. As a young associate attorney, he distinguished himself as a hard worker who was always eager to get into the courtroom. He honed his trial skills trying the firm’s smaller cases, securing many victories along the way. Mr. Marlin was invited to become a shareholder in the firm in 1995. Several months later, he obtained his first multi-million dollar verdict, securing an award of $8,847,320.00 on behalf of a little girl who had been rendered a paraplegic as a result of a homeowner’s negligence. The verdict was the largest in the State of Colorado that year.

Over the course of his career, Mr. Marlin has represented many clients suffering from the devastating effects of a traumatic brain injury. In 2002, he tried a case on behalf of a woman who suffered a traumatic brain injury when her automobile was struck by a drunk driver. Following a one-week jury trial, Bill and his co-counsel obtained a verdict of $2,146,911.00 on behalf of the woman, which far exceeded the $40,000.00 offered by the drunk driver’s automobile insurance company prior to trial.

The verdict also far exceeded the amount of insurance available to protect the drunk driver, and Mr. Marlin pursued a bad faith lawsuit against the drunk driver’s insurance company to collect the full amount of the verdict. He has represented many brain injured clients over his career, and he appreciates that brain injured people are often misunderstood in our society. Special care must be taken when presenting these cases to make sure the jury fully understands the nature and impact of this devastating and life-altering type of injury.

In 2006, Mr. Marlin tried a case on behalf of a woman who accidentally drank a lye-based cleaning liquid which had been placed in an empty tequila bottle by an employee of Intrawest/Winter Part Restaurant Corporation. As a result, the woman suffered severe chemical burns which necessitated surgical removal of her esophagus and reconstruction of a new esophagus using a portion of her colon. After a week-long jury trial, he obtained a verdict of $4,400,000.00 on behalf of his client, which is the largest personal injury verdict on record in Grand County, Colorado.

Mr. Marlin and his former law partner tried a medical malpractice case on behalf of a young girl who had been born prematurely. While she was in the neonatal intensive care unit, her healthcare providers failed to timely diagnose and treat a visible skin infection. Left untreated, the skin infection moved into the baby’s blood and seeded in the bones of her ankle, where it caused a serious bone infection. As a result, the little girl had to have her foot and lower leg amputated and will be required to utilize prosthetics for the remainder of her life. Following a two week jury trial, the jury returned a verdict of $2,772,350.00 on behalf of the little girl, which far exceeded the $250,000.00 offered by the medical malpractice insurance company prior to trial.

Outside of representing clients, Bill loves to travel to new locations. Among some of Bill’s favorite hobbies are hiking, snowboarding and taking in live music concerts. He most enjoys spending quality time with his wife and three children.